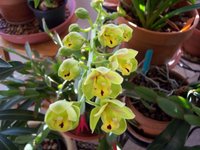 I am always gardening in one way shape or form and this weekend have a new flower in bloom in my indoor garden, namely a Cymbidium orchid. So I hope it will brighten everyone's day. Actually I am pretty excited about this plant since my growing space tends to relatively warm and Cymbidium's need cool temperatures.

But I kept the plant outside until the beginning of November to set buds before bringing it inside. I was not sure if my tactic worked, since no spike was visible when I finally gave up playing chicken with the frost and brought the plant inside.

Today I attended the conference at the University of Kansas's Dole Institute of Politics which featured the attorneys who won the recent suit against the Dover PA. School district. This was a wonderful event which not only included the Dover attorneys but also some of the major players in the recent political and religious controversy in Kansas. The conference was moderated by Eugenie Scott of the National Center for Science Education.

1. Intelligent design is just creationism repackaged They made this point by documenting the changes made to that creationist text, Of Panda's and People to hide the religious agenda of the ID movement. For instance changing a reference to an "intelligent creator" to the more neutral sounding "intelligent agent". Harvey's comment was that the ID proponents "Didn't even switch Horses, just changed the name of the horse." Indeed the lack of candor on the part of the ID proponents became a central theme in the hearings and in the judge's decision. (pdf).

It is worth quoting from Judge Jone's decision here:

"The citizens of the Dover area were poorly served by the members of the
Board who voted for the ID Policy. It is ironic that several of these individuals,
who so staunchly and proudly touted their religious convictions in public, would
time and again lie to cover their tracks and disguise the real purpose behind the ID
Policy."

2 . Intelligent design is not science. Eric Rothschild showed how he was able to counter Michael Behe's arguments about irreducible complexity by documenting that the scientific literature abundantly contradicts Behe's claims. I wonder if Behe has learned to spell exaptation yet.

3. Judge Jones who rendered the decision against ID has been criticisms as being an activist judge who should not be able to rule on what constitutes science. Rothschild counters that judges rule on what is science all the time for instance in the case of expert witnesses.

Richard Katskee from Americans United for Separation of Church and State discussed what we can expect in the future from the creationists. He expects more Dover cases,attempts to use stickers to single out evolution as in Cobb County GA, and creationist teachers to attempt to sue school boards who forbid teaching of ID. Also expect more attempts to sneak ID into other classes.

Pedro Irigonegaray who ran the cross of the Board of Education's summer hearings on the teaching of evolution pleaded with the ID board not to force this issue into litigation. The other attorneys agreed and pointed out that litigation arises from a failure of the political process to work properly.

Steve Case from the Center for Reasearch on Learning at the University of Kansas noted that education in Kansas is not broken but the politics in Kansas is.

Of course politics came up and one thing I asked Board of Education member Sue Gamble was what can be done about the new conservative Board commissioner, Bob Corkins. Are we stuck with him? According to her, he serves at the pleasure of the board. So it seems to me likely that Corkins will be an additional issue in the upcoming election as he has been widely criticisms as being unqualified for the job. Well you be the judge when a newly hired employee wants to hire a consultant to help him learn the job. Corkins is important because he appoints the representatives to the standards writing teams.

Red State Rabble (Pat Hayes) was also here and I am sure he will have plenty more to say about this meeting. 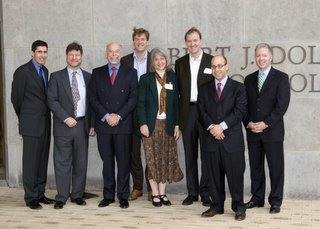 Chris Haufler has graciously given me permission to use his group photo from the meeting. He was sitting next to me with his super camera and I am sure he enjoyed watching me with my camera phone.


I just got the names to associate with the people in the photo:

This is courtesy of Jack Krebs from KCFS. He should be in the picture as well for all he does!

Lot's of things have happened while I was away over break. First the Dover school intelligent design trial has finished and intelligent design ruled to be religion NOT science. What many people forget is that this controversy is just part of a larger problem namely the politicization of the educational process and use of the educational system as a battle ground in the "culture wars".

For instance at UCLA a mysterious group called the Bruins alumni association (http://www.uclaprofs.com/)offered pay for students to tape professor's classes and give the group notes and handouts from classes to document left wing bias among UCLA professors. Since this has been exposed, the group has retracted the pay offer but still wants student volunteers to weed out what is billed as non professional behavior. Of course looking at the list of targeted professors , they are all liberal or granted in some cases radical left wingers.


The politicalization of education is nothing new in this country, after all in the 1970's scientists such as E.O. Wilson who is hardly any sort of extremist got assaulted from the left because of his views on genetics and human behavior. Public schools are of course pawns in these sorts of political wrangling. As anyone knows who has followed the various book censorship controversies. For instance our esteemed board of education is getting into the act by asking if certain books might be in violation of state obscenity laws.

Of particular note is that while school districts do (as they should) offer parents options for their kids reading one of the board members chairman Steve Abrams claimed that this in some way stigmatizes kids. Naturally there is no evidence for this and I can't help but wonder if Dr. Abrams would support programs to promote tolerance of LGBT students whom the data shows are victims of bullying. Gee.
Posted by Paul D. at 1:29 PM No comments: