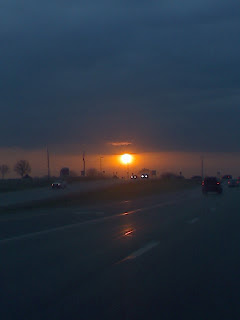 I enjoy taking pictures with my cell phone, sometimes in preference to my SLR and I think its in part that the limitation of the phone forces me to get more intimate with the shot and be a bit more spotaneous. The other thing is that since the resolution isn't so high-my little LG phone takes 640x480 pixel pictures-is that the photos come out sort of preprocessed. Of course our visual system involves several levels of processing anyway-so much for seeing the world as it is.

At any rate last week I took this shot with my cell phone while going to work. I don't know if one can find better sunrises then what we see along K-10 in Eastern Kansas.

One of my other secret pleasures is using the various filters in Photoshop Elements which include all sorts of painterly filters. Since I love painting I decided to have some fun putting this image through the filters. First I cropped out most of the image except for a relatively narrow part including the sun and the cars. I should have saved the original of that but I didn't and then decided to noodle around, first with the color and then with Photoshop Element's filters.

Here is what came out: 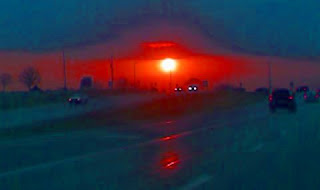 This image was made with the palette knife filter. I really like the red glow-almost misty look to the light. 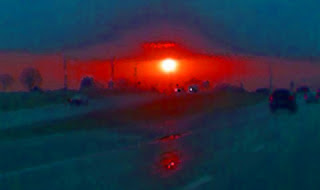 Here is just a slightly different version of the same image with a courser setting-bigger knife strokes. More seems to be going on in the foreground. I like the more impressionistic look of this one. 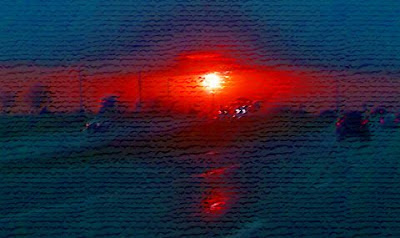 Finally even though I am not a great fan of pastels except for Degas, I put my cropped image through Photoshop's rough pastel filter using canvas texture. Quite a different effect.


See also a related entry in my Science Blog, Dangerous Ideas.
Posted by Paul D. at 11:03 AM No comments:

A friend of mine, who happens to be a global warming skeptic, sent me about an article from Investor's Business Daily. The article reports claims by a Geophysicist Phil Chapman. He argues that we might be entering a long term lull in sunspot activity. This is significant since low levels of sunspot activity actually relate to lower solar output. He claims that the start of the next sunspot cycle has been delayed and that there should be more than one sunspot visible at this time. Curiously though when I went to the sunspot link at SpaceWeather.com mentioned in the article, no one else seems overly concerned. In fact today's sunspot report notes an upswing in activity...

"Our star is criss-crossed by dark magnetic filaments and peppered with active regions that are not quite sunspots but seething nevertheless. "What a great show," he says. Readers with solar telescopes, take a look!"

So while he is right- there is only one sunspot currently visible, clearly there is more activity on the way.

More interesting to me is his claim of extreme global cooling in 2007. According to the article Dr. Chapman claims:

"This has been a winter of record cold and record snowfalls. The four major
agencies tracking Earth's temperature, including NASA's Goddard Institute,
report the earth cooled 0.7C in 2007, the fastest decline in the age of
instrumentation, putting us back to where the Earth was in 1930."

What's interesting is that when you look at what

">Goddard actually says about 2007, the picture is very different:

"As we predicted last year, 2007 was warmer than 2006, continuing the strong warming trend of the past 30 years that has been confidently attributed to the effect of increasing human-made greenhouse gases,"

Maybe some one more astute about global warming data can explain what's going on. Where is the data supporting the 0.7 degree claim?

It wouldn't bother me except one of my biology students got the 0.7 temperature dip idea from his dad who claimed to have seen it on the weather channel. Only if you go to the weather channel web site there is no mention of it. Maybe I missed a passing mention of the sort "so and so says..." Meanwhile Chapman's claims echo through the blogosphere and takes on the status of urban legend.

Too bad. No one wants there to be really be a climate problem, but maybe some folks are wishing so hard they are starting to hallucinate false data. If Chapman's data has a real basis in fact I'd like to hear about it.

Show me the data!

Update: I issued the same challenge on my science blog and got some responses:

Here is a link to that original post-basically the same as what's here-data links and responses back and forth. The data are real but as I ask there-are they meaningful?

Check it out and feel free to jump in at my LJworld blog. 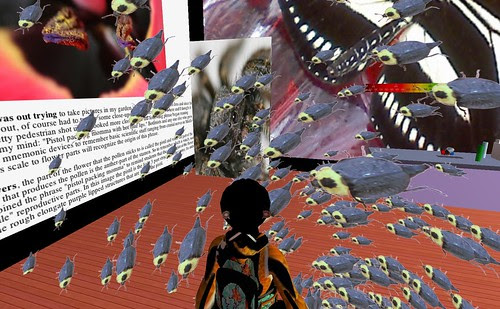 Well not quite. But I've been experimenting with particles which are kind of like textures except they are not on an object. Particles are often used for effects such as falling leaves, or smoke or snow or fireworks. One of the cool things you can do is use your own textures.


So this image shows my Second Life home being overrun by hundreds of beetles. These are carrion beetles so probably not what most people would want running around Second Life unless of course they are entomologists.
Posted by Paul D. at 3:01 PM No comments: 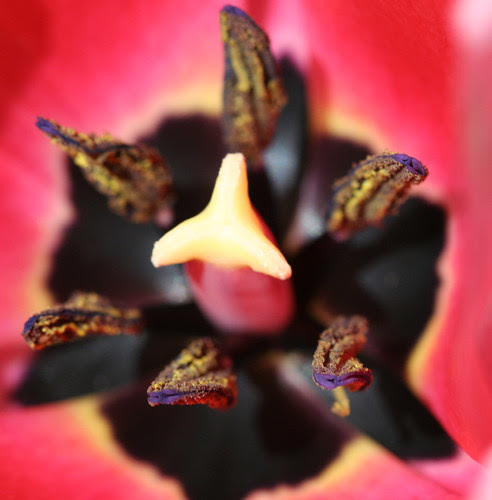 Today I was out trying to take pictures in my garden in the wind using my macro lens and since the tulips are out, of course had to try for some close-ups. My best result is shown here and I thought it was a pretty pedestrian shot until I looked more closely and the following phrase began running through my mind: "Pistol packing momma with hot blue lips." Botanists and any one else who grew up learning mnemonic devices to remember basic scientific stuff ranging from cranial nerves to Mohl's hardness scale to flower parts will recognize the origin of this phrase.

Hence "Pistol packing momma with hot blue lips." May you never look at tulips the same.
Posted by Paul D. at 4:07 PM No comments:

As many of you may know, Ben Stein has a new documentary Expelled on how Intelligent Design advocates and the great research they do is being suppressed by the scientific elite.
http://theforcethat.blogspot.com/2008/03/scare-tactic-alert.html

Of particular interest is this first hand report by Michael Shermer on how Stein plays fast and loose in the production of his movie. According to Shermer, Stein's movie includes a scene of Pepperdine University students being addressed by Stein and presumably hungering for Stein's version of the truth. But Shermer reports:

"Actually they didn't. The biology professors at Pepperdine assure me that their mostly Christian students fully accept the theory of evolution. So who were these people embracing Stein's screed against science? Extras. According to Lee Kats, associate provost for research and chair of natural science at Pepperdine, "the production company paid for the use of the facility just as all other companies do that film on our campus" but that "the company was nervous that they would not have enough people in the audience so they brought in extras. Members of the audience had to sign in and a staff member reports that no more than two to three Pepperdine students were in attendance. Mr. Stein's lecture on that topic was not an event sponsored by the university." And this is one of the least dishonest parts of the film."

Now to be fair, I suppose Michael Moore has used similar sorts of ummm short cuts...but since a big point of Stein's film is the dishonesty of the scientific establishment I would expect Stein to rise above slick production tricks. Instead it looks like we get more intelligent design smoke and mirrors and it sounds like the viewer is asked again to ignore the little man behind the curtain (maybe Michae Behe?), something I am sure the fundamentalist religious audience for whom this film is intelligently designed is more than willing to do.
Posted by Paul D. at 12:36 PM 2 comments:

Also notice how Summer Seale uses textures to "flavor" her particles
Originally uploaded by Torley
One of the neat features of second life is called particles. These are like free floating textures. So if you go into second life and see fire works or smoke or flames coming out of some object, most likely that is done with particles. One of my flickr contacts, Torley Linden, took pictures of a set of particle streams made by another Second Life resident Summer Seale. These show very nicely the artistic side of particles beyond using them for mundane effects such as fireworks or falling leaves.
Posted by Paul D. at 11:09 AM 1 comment: