Why are plants green?

My last post was about light and fortuitously today a couple of news items fit right in. Both items relate to a question I ask my students when we discuss photosynthesis, namely why are plants green. The simple answer is that the chlorophylls, the main photosynthetic pigments reflect green light and absorb red and blue light. The reflected light is of course what our eyes detect and our nervous system perceives as color and most professors seem to stop here. But I then turn the question on its head and ask why aren't plants black? After all, if the name of the game in photosynthesis is light absorption then shouldn't plants be black?

The usual response is that maybe plants can't do any better. The problem is plants that have other pigments, such as carotenes and xanthophylls that absorb light in the middle of the visible spectrum at those wave lengths that chlorophyll cannot. Another hypothesis my students often raise is that if plants absorb all the light available to them, they might overheat, much like wearing a black shirt on a hot day. Seems reasonable until you consider that plants in the shade where they ought not overheat are still typically green. 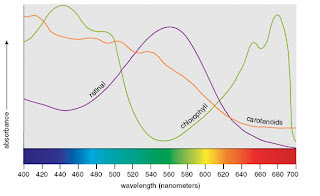 Getting to the news items, the first one from Live Science suggests that photosynthesis arose in a group of bacteria that used a simpler pigment called retinal found today in a group of bacteria (Actually Archeans) called Halobacteria . Shil DasSarma, from the University of Maryland notes that retinal absorbs best in the middle of the spectrum where chlorophyll cannot. Indeed the absorption spectra of the two pigments are eerily complementary as the accompanying figure from American Scientist shows. 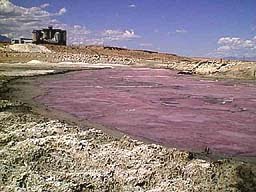 
The second article from Scientific American looks at the sorts of colors photosynthetic organisms might be on other planets. Nancy Kiang from the Goddard Space Center analysed the spectra from other stars to attempt to predict what color photosynthetic organisms might be. This seems like an elaboration of a question I ask my students where I present them with a hypothetical planet Munimula (for those who remember Ruff and Ready Cartoons) orbiting a sun that produces light of the wavelengths we perceive as green. I ask the student to predict the color of plants that might evolve on such a planet. They are supposed to get the idea that the plants must be able to absorb the available light so were you to view plants from Munimula under white light, they would definitely not be green because they must have evolved to absorb the wave lengths we perceive as green.

So why are plants green? Maybe the good enough hypothesis combined with DasSarma's hypothesis is on the right track. But plants are still able to fine tune pigments. Indeed algae and other photosynthetic organisms in the ocean where short wavelengths of light penetrate further than long wavelengths, perceived as red, absorb short wavelengths and appear black or red under white light. So it seems terrestrial photosynthetic organisms ought to better fine tune their pigment systems.

I leave you with another idea that I have been thinking about. Maybe for all intents and purposes plants ARE black in the sense of absorbing as much light as possible and that it is our visual systems that have been fine tuned by evolution to be sensitive to what little light that is reflected from the leaves. What ever idea or combination of ideas is involved, sometimes the best and most interesting questions in science are what at first glance are the simplest to state.

One more little tidbit. Retinal is found not just in the Halobacteria, but is found as part of the light detection systems of the eye. So is this convergence in the use of retinal independently hit upon by the early photosynthetic organisms and animals or do we see in the visual pigments of the eye the remnants of the first invention of photosynthesis by early cells maintained in the context of light detection and image formation rather than photosynthesis.

Even if humans evolved to easily notice the wavelength that is perceived as green, that wouldn't explain why plants don't absorb that green light. it would answer the question that is the title of this post, though.

i've also wondered for a long time about the green of plants.

is it possible that the middle range of visible light colors that we perceive as green may overheat a plant? an analogy to this would be that we can hear very low bass sounds as well as very high treble sounds, but can still distinguish middle range sounds in the presence of those high and low ones.

i guess the high/low frequency explanation would be based on the idea that it's easier to handle two extremes than it is to handle a middle-ground. with an extreme, you have only to focus on one particular enemy strategy.

i'm just freethinking. regardless of the answer, i enjoy this post. my biology professor directed me to it after i asked why plants aren't black in class.

The idea that our eyes are more sensitive to the color green is a very good one IMO and backed up by other other studies. You can test it for yourself - you will be able to detect a green trafic light much further away than a red or yellow one especially during the day. Another interesting thing is to look at satellite pictures from Google and note how dark the vegetated areas appear compared to the cities. That seems to confirm that plants are absorbing some of the green spectrum but just not quite as much as the others in keeping with the postulate that plants ~ought to~ have evolved to absorb as much solar enrgy as they possibly can. I would surmise that the reflective index of materials that comprise the mechanical supporting structures within the leaf surface would be of a wavelength providing the least opaque-ness to the wavelengths that that the plant can utilize the best. IE - "Green light does the least for me, my supporting cell structures have to have some pigment, so having them green is the most efficient color to use."