The Woods by the College:sustainability and synchronicity 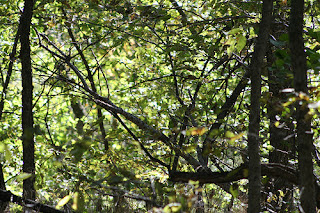 But I wondered aloud to my colleague if people really understood the sort of sacrifices that true sustainability might entail. For example there are studies which have looked at our civilization's use of planetary resources and the damage we have done to the ability of our planet's systems to sustain our population. Several studies claim that we have effectively overshot the planet's capacity to sustain our population and that we would need to have the resources, biological and otherwise of several Earths to have a sustainable planetary population with the standard of living equal to that enjoyed by people of this country. See for example http://www.footprintnetwork.org/gfn_sub.php?content=footprint_overview.

Since we only have one Earth we have a little problem of insuring that everyone has a decent standard of living. Now one might argue that technology might help us here, but our track record on mobilizing new technologies has not been particularly good, unless you count the development of hybrid SUV's mobilizing technology in a sustainable way. We can hope for a transforming technology to save us. Scientific and technological development is notorious hard to predict, but the trend in resource use, destruction of habitat seem pretty clear and hard to avoid in the short run even we to develop a set of new sustainable technologies. Sustainability is important but I wondered to my colleague if it isn't in danger of becoming a feel good buzz word...like organic or ecology.

At any rate...to the woods. At JCCC we have a wonderful campus wonderful resources for teaching, great staff and an energetic new President. Last week I was riding to work on the bus and was noting the contrast between the college's brick work architecture and well groomed appearance and the scruffy looking patch of woods next to the college's entrance. What a contrast-we are thinking of sustainability in terms of the engineering and management systems we use and how we can tweak them to reduce waste-kind of the Spaceship Earth paradigm. And yet natural systems as epitomized by this patch of woods manage to sustain themselves quite nicely even though the self regulatory nature of biological communities is really an illusion compared to the designed regulation of our technological systems. So from here came this poem that attempts to capture in a few lines some of these ideas:

So to the poem:

The Woods by the College

Not all that long ago this whole space
Was prairie of tall and mid grasses
Swaying across the decades following
The shifting rains east then west,
Except here where a spring feeds
The roots of mock orange and locust
And hack berry and brambles.

Somehow this lot survived by a whim
The building of the campus.
But no one visits here unless
We take our students to see
The stream cut in the grey clay,
Let them pick among the briers,
Trees muffling traffic and shouts
From the tennis courts.
We let then scrape samples
From the wood's trickling womb
And a cardinal scolds us over the water sounds
As we leave for the geometry of brick,
Leave behind the illusion of design
That sustains itself in the real world,
One Earth deep as we say we want
Though our design is many Earth's deep
Beneath the illusions we create.

Now to the synchronicity. That night my wife and I decided to get Chinese food and my "fortune" which by the way I pasted into my poetry journal reads:

"The one that recognizes the illusion,
does not act as if it real."
Posted by Paul D. at 9:31 AM 3 comments:

This wonderful fly pollinated plant (Huernia plowseii) is in the milkweed family (Asclepiadaceae) and these plants are sometimes called carrion flowers because some species smell like-well-carrion. Makes sense since these guys are fly pollinated. This species doesn't have much of an odor and is a wonderful easy to grow and propagate succulent. 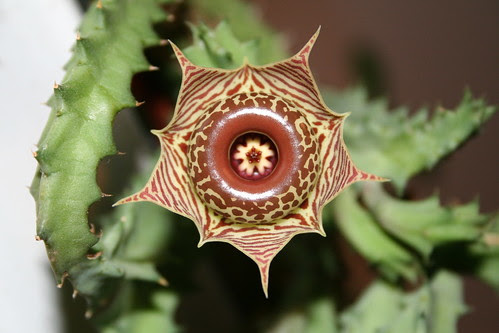 For more pictures of succulent Asclepiads check out this site:
http://www.succulent-plant.com/asclepiad.html
Posted by Paul D. at 8:04 PM 1 comment:

Sexism and Creationists...what a combo

I like to tell my Biology and Genetics students that we are for the most part out of the sexist bad old days when women were thought to be incapable of doing science...but Michael Behe-he of the irreducible bacterial flagellum has demonstrated that sexism is alive and well. Seems he is playing the gender card in the case of grad student virologist, SA Smith when she had the gall to correct the Dr. Behe about the evolution of the HIV virus.

Well I had to check what Behe said for myself, because I had met Behe and watched his testimony at the Kansas Creation Science hearings and he seemed like a nice sort of guy though majorly confused about what his own paper on the evolution of proteins was really saying.

"Although she calls herself a “pre-grad student,” the tone of the post is decidedly junior high, the tone of someone who is trying hard to compete with all the other Mean Girls on that unpleasant website. I’ll pass over all that and try to stick to the substance."

Hmmmm I had to look up Mean Girls and I assume Behe is really referring to this site connected to the movie, Mean Girls. Sounds to me as if Behe has taken to imitating a real life Mean Girl Ann Coulter. I guess Behe is a bit grumpy given the failure of his irreducible complexity ideas to explain anything about biology. Or maybe its simply that 19th century scientific beliefs go hand in hand with misogyny.

To be fair to Dr. Behe, maybe he is really meaning to play the "I'm the professor she's the grad student" card. As if THAT is going to win any friends and influence people. Also to be fair misogyny along with racism is found in other scientists including some who are decidedly NOT creationist, James Watson being a recent and ancient case in point.