This shouldn't come up, but it has.

You would think that today in America a person's sexual orientation wouldn't be an issue in an election any more than whether or not a person is married, single or divorced. But in one Kansas Board of Education race apparently partisans have not gotten the message. Seems that Kathy Martin and her supporters are trying to make an issue of the fact that her opponent, Christopher Renner is openly gay.

According to this article in the Hutchinson News Online, Martin's supporters argue that this is a valid issue, as voters have the right to know everything about a candidate. Carolyn Simms, a Martin supporter says

"...that voters should also be given all the information possible about the candidates they'll be choosing from."

Really, now. Maybe I should hire a private detective to see what juicy non election related things are in Mrs. Martin's background. Of course I really don't have to do that since Mrs. Martin has embarrassed herself enough as one of the gang of six that spent thousands of dollars on sham evolution hearings a couple of years ago and was a supporter of a completely unqualified Board of Education Commissioner who ended up resigning.

So hello Mrs. Martin! This is the 21st century. We don't fight about whether the Earth is only 6,000 years old or so anymore and we don't care about a person's sexual orientation as a job issue. How laughable this would seem except that there are still folks out there who are blissfully unaware that time has moved on. Mrs. Martin you are so 19th century!
Posted by Paul D. at 10:20 AM No comments:

A recent visitor to this blog, stumbled here looking for "poster assignment to teach asexual reproduction". Personally I have no desire to learn how to reproduce asexually. But hey that's just me. As for the searcher he or she got this link:

I don't think that is what he or she wanted-but maybe.
Posted by Paul D. at 9:47 PM No comments:

Sumac Lit From Behind 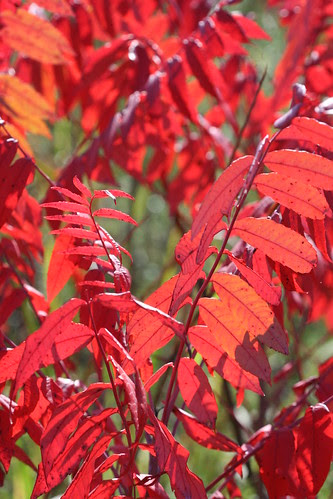 Even if sumac were red in the Spring
It would not be as beautiful as now
Where the deer sleep in their forms.
Posted by Paul D. at 5:53 AM No comments:

Colin Powell says why the best:

"...And I come to the conclusion that because of his ability to inspire, because of the inclusive nature of his campaign, because he is reaching out all across America, because of who he is and his rhetorical abilities — and you have to take that into account — as well as his substance — he has both style and substance, he has met the standard of being a successful president, being an exceptional president."

Sometimes it's all about "marketing" 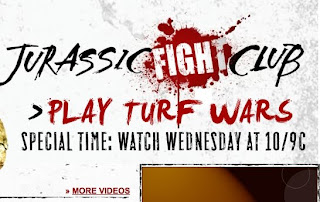 I am no fan of fights as any one who knows me understands. But I must confess to watching Fight Club on TV. Jurassic Fight Club on the History Channel that is. If you are not in the loop Jurassic fight club pits big predators from the past against each other using fossil evidence to create what the creators think are plausible scenarios, say between a giant megashark and an early whale-OK so the program strays a bit from the Jurassic.

Some of the scenarios are a bit implausible and anthropomorphic (There isn't a fancy word to describe the attribution of the thought process of 25 year old males who wear grimy backwards baseball caps into fancy restaurant to other organisms) but the program gives a really nice introduction to how scientists make inferences from the fossil record and the tools they use.

So I recommend this series if you are curious about just what scientists can learn from the fossil record-it turns out to be much more than you might think. For instance it is quite possible to match up teeth marks with teeth much like human forensic experts match knife blades to cuts in flesh or bone and I just hate to bust the bubble of any young earth creationist types the evidence does NOT suggest that T. rex was ever a vegetarian.

The fight approach to organism interactions and evolution goes back at least to the 19th century to Darwin and the early evolutionists who viewed evolution and natural selection often in terms of competition-much of this was probably as much due to Darwin's early adherents as much to Darwin. Be that as it may, the metaphor still holds sway in the popular psyche even if scientists have a much more sophisticated understanding of how evolution operates including the ability of evolution to lead to cooperative behavior and even the moral sense displayed by humans in some of our finer moments.

At any rate I was reminded of the marketing aspect of all this by a headline on the BBC website today that screams out:

Two of the UK's worst aquatic invasive species are set to meet.

Scientists believe that the ranges of the plague-carrying non-native crayfish and the fierce Chinese mitten crab are beginning to overlap. 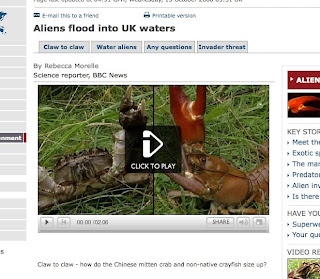 Well of course I had to check this out..plague carrying crayfish and fierce Chinese mitten crab. Wow! And the article even has a picture of both the beasties in fight mode and a video about these alien thugs preparing to meet. While the plague of course is not the Black Plague but rather a disease that infects native crayfish in Britain, the BBC coverage does correctly highlight the threat posed by these two species. And the question about what will happen when these non native species to Britain meet is an important one. So I guess that I can't really fault the hype involved in getting people to read about science.

Hey it even worked for me and I don't even own a baseball cap, grimy or not.

The folks over at Fox News are carrying on about a supposed injustice done to Sara Palin by Newsweek Magazine. Seems that the latest cover shows a close up of the Governor's face. Exposure on the Cover of Time or Newsweek is usually considered to be a good thing. But the commentators over at Fox report that the photo is unflattering allegedly because it was not touched up. See  Cover Girl.
Of course the Republican News Network..I mean Fox ought to know all about retouching photos. According to Media Matters, Fox has done a little retouching of it's own on several of it's opponents with very unflattering results. Well as Fox might say: "you decide":
Actual and Fox Retouched photos from Media Matters: 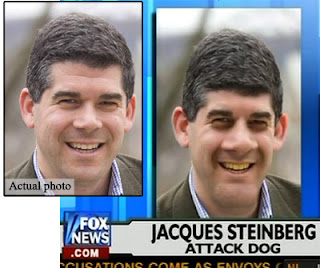 Somehow I don't think this is the type of touch up job Fox had in mind for Governor Palin.
See also this article from the NYTimes.
I can't find a good image of Newsweek's cover but here is a link to Newsweek's coverstory about Palin.
Reading the article leads me to wonder if all the whining about the cover is designed to distract people from reading the article which asks:

Are there many politically attuned people in America now who can honestly say the same thing of Sarah Palin? That they can effortlessly envision President Palin in the Oval Office, ready on day one to manage a market meltdown or a terror attack? Whether one agrees or disagrees with his politics, there is no arguing that McCain is qualified to be president of the United States. But there is plenty of argument about Palin's qualifications. Why should we apply a different standard to the vice president who would stand to succeed him?

Why indeed. Personally while I am a registered Democrat and a liberal, I confess that I was actually willing to "kick the tires" and give Senator McCain a chance to convince me-and this in spite of the the fact that he seems to have abandoned his natural pragmatic non-ideological approach to politics. But his choice of the glib, naive Palin-a book censoring creationist to boot- closed out McCaine as a serious candidate in my mind. Too bad because I really do sympathize with McCain's professed desire to shake things up. Palin was just the wrong way to do it.
Meanwhile, Senator Obama has proven an able campaigner-clearly quite capable of doing the top job. And while Biden doesn't have Palin's energy he is a scrapper and far and away more qualified than Palin.
For the record I was a Richardson supporter.
Posted by Paul D. at 7:08 PM No comments: