Exaptation and Snakes on a plane

I heard the expression snakes on a plane the other week and being etymologically oriented as well as entomologically oriented, I had to check this new phrase out. According to Urbandictionary.com, "snakes on a plane" means something around "Cest la vie",and "Shit happens" and the phrase relates to a working title for a movie of the same name, and popularized by a screenwriter Josh Friedman in his blog, http://hucksblog.blogspot.com in an entry protesting a proposed change in the title of the movie. Friedman explains his ire about the change in an entry you can read for yourself. Warning, if you don't like certain four letter words, you might want to be content with this quote

"In fact, during the two or three days that precedes my phone call with the studio, I become obsessed with the concept. Not as a movie. But as a sort of philosophy. Somewhere in between "Cest la vie", "Whattya gonna do?" and "Shit happens" falls my new zen koan "Snakes on a Plane".

Now what is this exaptation stuff? Exaptation is the evolution of new adaptations from adaptations that evolved in a different context. For example, leaves which evolved mainly as organs that carry out photosynthesis, become thorns in cacti and become adaptations that protect the cacti from grazing animals.

So today I used "snakes in a plane" to illustrate a parallel between cultural and biological evolution. The "snake" is a basically a cultural exaptation-from a movie title to a phrase meaning "that's life or "s__t happens". OK I am don't use scatological terms usually..I might quote them but will not use them. Some biologists view cultural evolution as having a close correspondence with biological evolution. I think the analogy is going a bit too far, but ideas do seem to take on a life of their own, meanings become exapted (perhaps coopted), and the results of this maybe quite creative and unexpected. That is one of the fun things about language and one of the fun things about the results of biological evolution!

Personally I think that this is a bit of an artificial distinction and I prefer to think of exaptations as a particular type of adaptation. After all given the tendency of evolution to reuse and reshape existing features, there is a certain sense that most adaptations involve exaptation. See for instance: http://plato.stanford.edu/entries/teleology-biology/, which views the distinction between adaptation and exaptation as as merely a technical one, a matter of taste.

Here is a fun explanation of exaptation in terms of the Jerry rigged solution used to save Apollo 13:

Today my 10:00 class had a lot of absences. When I asked my students if something was going on, one replied that maybe people were wasted from yesterday. Why yesterday I asked? The reply came: "420". What's that? A student explained that 4/20 was a day to smoke pot and that it also had some connection with Columbine and was some sort of police code when they were going to make a bust.

Well the truth is a bit less interesting. According to www.snopes.com, (http://www.snopes.com/language/stories/420.htm), the authority on urban legends and slang, "420" began among a group of high schoolers to signify the time of day when they could light up...and I don't mean cigs either. Somehow this spread and the meaning shifted to the date April 20 rather than 4:20 pm aided by an unfortunate set of coincidences; for instance 4/20 is the birth day of Hitler and yes it was the day of the Columbine massacre.

All the other baggage supposedly related to 420- that is some sort of police code is not true. Oh yes Albert Hofmann took his first intentional LSD trip at 4:20 on 19 April 1943, having previously accidently taking LSD isolated from the fungus that produced it.

So have a nice 420 tommorrow, whatever your trip.

A Conversation with Albert Hoffmann http://www.maps.org/news-letters/v08n3/08330hof.html

NIDA Infofacts: LSD(http://www.nida.nih.gov/Infofacts/LSD.html) You trust the government right?
Posted by Paul D. at 8:20 PM No comments:

Been very busy but just thought I would post some pictures from my garden. I am not a big tulip fan but this year the tulips seem much more intense... 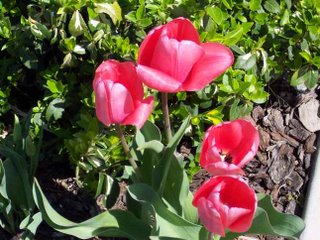 For instance these pink ones...

or my favorite these red ones. I like them because they remind me of some of those intense red flowering desert cacti..the kind I do not have in my collection: 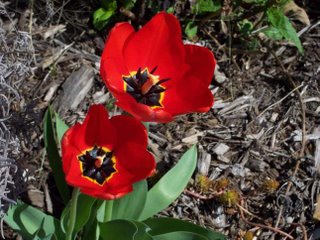 and next is this yellow and red variety: 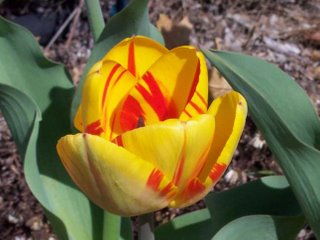 Some of my favorite flowers are more subtle such as this white flowering viburnum, not yet open, growing on the north side of my house. I love the subtle pink of the unopened blossoms: 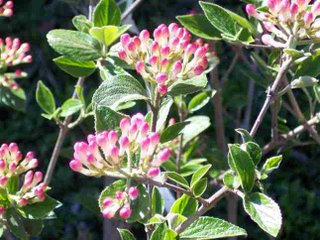 Of course what is gardening without a little excitement in the form of this tough little snake: 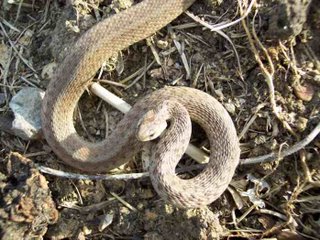 A constant creationist claim is that there are no transitional fossils. And yet as palaentologists will tell you the fossil record is full of transitional forms-indeed as Larry Martin at the University of Kansas puts it "My drawers are crawling with transitional forms". Now the creationists do have a technical point-namely one cannot PROVE that a certain fossil that appears to be transitional really is the direct ansestor of another species.

But the more one looks, the more transitions one sees, to the point where the creationist'c claim strains comon sense. The latest transitional form (Tiktaalik roseae) reported in Nature (http://www.nature.com/nature/journal/v440/n7085/edsumm/e060406-01.html)

fills in a critical gap between fish and land vertebrates.

As Dr. Michael J. Novacek from the American Museum of Natural History noted:

"We've got Archaeopteryx, an early whale that lived on land and now this animal showing the transition from fish to tetrapod. What more do we need from the fossil record to show that the creationists are flatly wrong?"

How many more indeed.

Other Links and additional comments:

"Like its immediate ancestors, Tiktaalik is scaly and displays gill and fin features that indicate it lived mostly in the water. But it lost its gill cover and its snout grew, suggesting that changes were under way in the creature's breathing mechanism and in its food sources. It boasts a heftier rib cage than its ancestors, presumably to support it when it leaves the water. It's skull has lost related bones associated with fish but missing in tetrapods. Another gill feature, a tiny slit that became part of the ear in tetrapods, has grown wider. And the bones in the fins along its sides point to proto-limbs with enough strength and flexibility at the shoulder, elbow, and wrist to allow Tiktaalik to lift itself off the bottom and perhaps temporarily move about on land."