A snootful of e-mails

The climate noosphere is in an uproar about a bunch of e-mails there were hacked from a global climate site. The e-mails are allegedly from prominent climate scientists and date from the late 1990's. According to this article in the NY Times at least some of the e-mails don't show climate scientists in a very favorable light. For instance one e-mail talks about using a statistical trick, another e-mail calls global warming skeptics "idiots".

I have actually looked at some of the e-mails and quite frankly a lot of it really does look like the kind of give and take that people taking a particular position might have. Somehow I doubt that a similar hack of climate skeptic e-mails would be any different.

It is clear that the scientists involved are aware of the skeptics and how skeptics might react if certain data sets are not properly explained:

"Otherwise, the skeptics have an field day casting
doubt on our ability to understand the factors that influence these estimates
and, thus, can undermine faith in the paleoestimates. I don't think that
doubt is scientifically justified, and I'd hate to be the one to have
to give it fodder!"

Well at any rate, I think this is typical scientific e-mail give and take in a highly politicized arena (been there myself) and I don't think that global warming skeptics should make too much of this stuff. Besides if they are crying foul because some one who disagrees with them in a private e-mail refers to them as idiots then maybe they ought to get thicker skins.

Don't take my word for it. You too can sleuth evil climate scientists e-mail by going to the following site and enter your favorite search term!

Of course I would love to have an equivalent set of e-mails between global warming skeptics - maybe working for a large oil company or perhaps a certain large business group that will go unnamed -and I just bet a little judicious browsing would yield lots of choice quotes. But of course hacking e-mails is wrong, a minor point seems to have been lost in this whole tea pot tempest.

For full disclosure, I have used the word idiot at least 27 times in my e-mail career, all of them of course quite justified.
Posted by Paul D. at 12:58 PM 2 comments:

Why do peope repeat falsehoods?

A few months ago I saw a claim that if theoretical physicist Stephen Hawking were in Britain with its socialized medicine he would have been dead by now. I blew it off as another stupid comment but apparently this comment has gotten repeated all over the web. The problem of course is the it is not true as Larry Krauss reminds us in this article in Scientific American:

So why do people repeat that sort of tripe?

"What makes people so susceptible to nonsense in public discourse? Is it because we do such a miserable job in schools teaching what science is all about—that it is not a collection of facts or stories but a process for weeding out nonsense to get closer to the underlying beautiful reality of nature? Perhaps not."

My thought is that whether we are dealing with health care, global warming or various sorts of social issues, we get an emotional high from thinking we are going to win, pull the wool over our opponent's head. Or maybe repetition of simple nostrums and unexamined falsehoods provides us with a sense of security when dealing with the unknown. Maybe such behavior was at one point adaptive maintaining some sort of group cohesion.

Krauss phrases his arguments with examples from the right, but I don't think people of any ideology are immune to this. As I commented in a post to one of my readers it is if we are stuck in a strange attractor or the sort of cycling that a person's brain might get into when they are depressed and can't get out.

As Krauss so ably observes, quoting apparently from an earlier Krauss commentary:

“The increasingly blatant nature of the nonsense uttered with impunity in public discourse is chilling. Our democratic society is imperiled as much by this as any other single threat, regardless of whether the origins of the nonsense are religious fanaticism, simple ignorance or personal gain.”

This Halloween we decided to go to a party once we disposed of all the trick or treaters (heh heh heh) and we decided to pay homage to our favorite Disney villainesses.

So here is the lovely Maleficent: 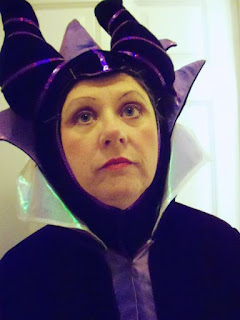 
and the ever lovely Cruella De Vil: 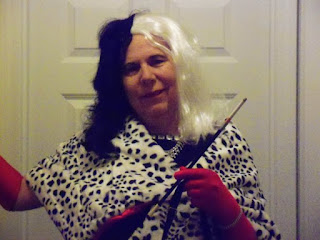 Even everyday happenings are full of surprises when seen on a different scale of length or time or both and this video of falling water drops coalescing with the surface of water shows this very nicely. There are two effects going on here surface tension and more surprisingly to me a thin film of air. Enjoy!