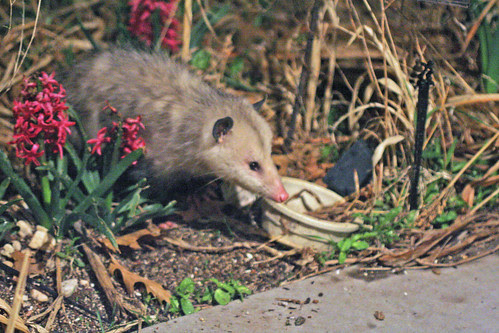 I think this cutie-well I think it's cute- was probably feeding on left over seeds spilled from our bird feeder.
Posted by Paul D. at 7:46 PM No comments:

There is an interesting article in the science section of the New York Times about the effects of domestic cats on bird populations. 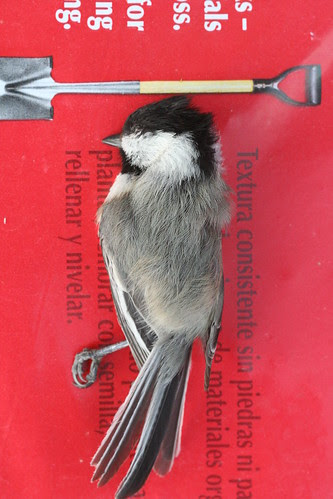 As the headline suggests, domestic cats are a major threat to bird populations. The article suggests that over 500 million birds are killed by cats each year in the United States-half by feral cats and half by house pets. The article also makes an interesting point that people get all upset about bird deaths due to wind turbines and yet seem to be much less upset about bird deaths due to cats. Wind turbines by the way can apparently be situated to minimize bird deaths.

We accept predation as somehow natural but forget that the domestic cat is not native to North America and so is really an invasive species-so they are more like those big constrictor snakes that people have let loose in the everglades. Now if only we could train cats to attack non native birds such as starlings or English sparrows but I don't think that is going to happen.

Just by chance, my indoor only cat Carl caught and killed a chickadee that had gotten on to our screened in back porch yesterday. He had caught one other chickadee during the winter but he just held it in his mouth very gently and I managed to rescue the bird. This time he clearly figured out that the next step in hunting after catching the bird is to kill it.

I hope he never figures out the eating stage.
Posted by Paul D. at 10:06 AM No comments:

Ann Coulter whose previous forays into science have included such insightful critiques of evolution as the giant raccoon passing gas analysis of evolutionary theory has struck again. Apparently she has decided that we need not worry about radiation from Japan.

She bases her argument on a controversial idea called hormesis. The basic idea of hormesis is that certain environmental pollutants be they PCBs or ionizing radiation are harmful until you get to low dosages which mysteriously become beneficial. Proponents of this idea point to studies from a wide range of organisms that suggest that the phenomenon may indeed exist. But to argue as Coulter seems to that this means that government radiation safety levels are somehow useless seems to me to be the height of stupidity.

A bit of Coulter's reasoning can be seen in this quote from her article:
http://news.yahoo.com/s/ucac/20110317/cm_ucac/aglowingreportonradiation

"I guess good radiation stories are not as exciting as news anchors warning of mutant humans and scary nuclear power plants -- news anchors who, by the way, have injected small amounts of poison into their foreheads to stave off wrinkles. Which is to say: The general theory that small amounts of toxins can be healthy is widely accepted --except in the case of radiation.

So would she then argue that more is better? In the radiation case it may well be that DNA repair mechanisms are activated by low levels of radiation but that is precisely in response to the harmful effects of DNA, not because the radiation is beneficial.

A good critique of Coulter's ideas is at PZ Myer's blog: http://scienceblogs.com/pharyngula/2011/03/will_radiation_hormesis_protec.php

Coulter by the way, is an alumna of Cornell University which goes to show that you can show a person to how to think but you can't make them think.