A little science can be dangerous....

Rick Santorum not only doesn't accept evolution but he is a well known global warming sceptic. Recently he has attempted to give a science lesson on photosynthesis, noting quite correctly that plants require carbon dioxide-carbon dioxide being a raw material for photosynthesis. Therefore carbon dioxide can't be bad. So he has bought into the same sort of reasoning promulgated by the site CO2 Science which collects data on how much better plants grow when carbon dioxide levels increase. This video, Seeing is Believing, is pretty representative of what's on CO2 Science and is pretty effective and quite correct as far as it goes. Under controlled conditions and with plenty of other nutrients carbon dioxide does make plants grow better. But there are some big questions as to whether or not this increased plant growth will be sufficient to overcome the increase of carbon dioxide due to human activity. Some studies such as this one suggest that soils in forests can take up extra carbon in response to increased carbon dioxide levels. Sounds fine- but as noted by this primer on carbon dioxide and the carbon cycle, human activity such as deforestation has caused a net release of carbon dioxide to the atmosphere. Plus, as oceans warm they also become less able to absorb carbon dioxide. One can argue about what will happen long term-but if the plants and other photosynthetic organisms are able to take up sufficient carbon dioxide why are atmospheric carbon dioxide levels still increasing with no sign of slowing? See this diagram from NOAA. Somehow the global warming skeptics who argue that plants can soak up the carbon dioxide are missing the big point- they may be right in theory , but globally something is awry with this thinking. Either on a global scale, plants and other photosynthetic organisms are not responding as "common sense" says they should or human activity is reducing the ability of natural systems to respond, as they other wise might, to increasing carbon dioxide concentrations.
Posted by Paul D. at 12:36 PM 1 comment: 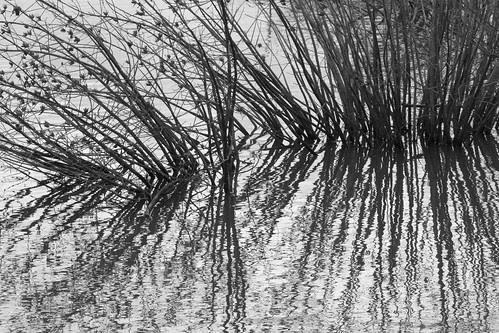 brush and water, a photo by pdecell on Flickr.

I love reflection shots. This one is from Baker Wetlands near Lawrence Kansas.

There is an interesting article in this month's Chronicle of Higher Education about intelligent design. Apparently some of ID's leading luminaries held a conference at Cornell University, my alma mater, and conned convinced Springer, a major science publishing house, to publish the conference papers as a volume called Biological Information, New Perspectives.

Apparently Springer posted a web page advertising this forth coming book on its web site but it was quickly pulled when science bloggers such as Nick Matzke over at Panda's Thumb discovered this page and posted about it here.

Springer immediately pulled the web page advertising the ID volume deciding that maybe it needs more complete peer review. Apparently, even as noted by this sympathetic review of the conference, participants were told to tone down their religious perspectives so that the conference would be more scientific.

In an update on Panda's Thumb more details have surfaced. First the conference was not well attended. There were 27 or so attendees and that apparently included the presenters.  Second the conference really had nothing to do with Cornell officially but was merely held in the auditorium at Cornell's fine hotel school. This auditorium is rented to the public and that is what happened here.  The conference apparently was not publicized and indeed was held in that in between time before summer semester. To be fair to the conference organizers, that time of year is a wonderful year to be in Ithaca as I spent four delightful summers working there as an undergrad.

That said, one wonders if the University is too happy about having its reputation besmirched by implied association with this conference.