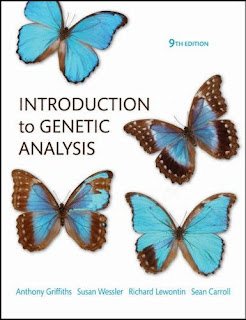 We just began our fall semester and there are lots of exciting things happening. First, I get to teach genetics in our brand new technology building. Lots of new equipment to learn and more keeps on coming. New books as well! I switched over to Griffith et al's book, Modern Genetic Analysis (9th edition). I am not sure all my students will be able to handle it but I am hoping the clear illustrations and engaging writing grab them. 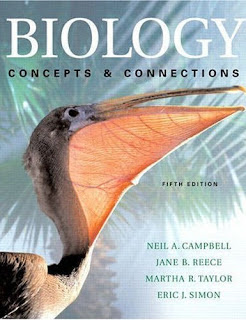 In biology, we switched to Campbell et al's Biology: concepts and connections after several tries to get away from the more encyclopedic texts that seemed to intimidate our students. Personally I found myself handicapped by the smaller texts since they typically leave out the sorts of examples that I like to use.


Oh and our college now has a Second Life island. Not much there yet but I am ready-complete with office, or at least a prototype office. Looks a lot like my RL office but the aim is to have this be to offices like telephone booths are to Dr. Who's space ship. 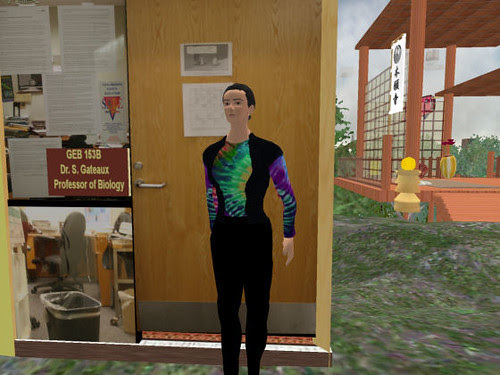 The views and door are from my RL office. Here is a peek inside: 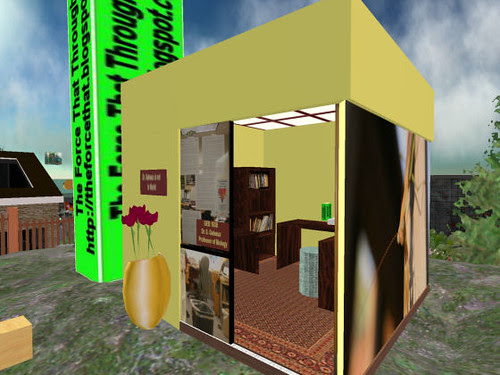 I do love insects that come pre macro'd so to speak. This lady was on my porch railing and she was just a tad over 4 inches not counting the raptorial front legs. 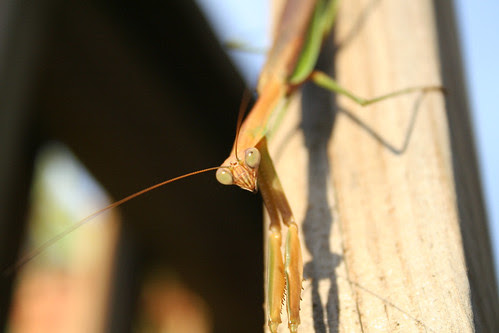 Clicking on the image will take you to my flickr stream...in case you want to get a bit more intimate with her.
Posted by Paul D. at 6:43 PM No comments:

The latest entry on Poetry Thursday says that the blog is going to cease operation at the end of August. This is too bad, but it does get hard to maintain a popular site such as that one. I wish Liz and Dana luck. I have met lots of great poets on the their blog and I will miss it. Liz and Dana provided a safe space to write and a chance to meet lots of wonderful poets.

All is not lost; there is a move to resurrect the idea under another name, hopefully with Liz and Dana's blessing.
Posted by Paul D. at 1:56 PM No comments:

Then there was the corn,
Each ear at exactly the height
To be picked by some machine
Rumbling under a billboard that says:
Food from farms, not big Pharma.

The farmer is at least rotating
Corn with legumes with weeds.
But never enough time between
For anything to go native,
Let alone remember what wild was.

The past is said to be a foreign country.
O what hope is there for me
So lost in the present?
What hope for this weed lost
Among the stalks of the corn.

This poem coalesced in response to a brief prompt at a writer's workshop at school this week. The prompt was something about the past being a foreign country, but I forgot to write the actual quote down. The images and observations about corn and soybeans and the sign for the poem had been rattling around in my brain since the weekend when we went to visit a friend, Doug Patterson (AKA "The Gambling Geek").

I am not a luddite, and the point of the poem at one level is that people fear biotechnology "Big Pharma" and yet when we do something as mundane as grow crops we alter the evolution of the plants. For instance we select plants that are best suited for harvesting by machine. What we do, of course, makes the plants less and less suitable for more natural environments including unmechanized agriculture. So not only are we becoming more dependent on technology, but we are forcing the biosphere into a similar sort of dependence- forcing other creatures to specialize along with us.

Maybe that is inevitable but we ought to go into this sort of change with our eyes open as to the risks as well as the benefits. Are we getting ourselves as a species into an evolutionary trap that will doom us should there be some lapse in technology?
Posted by Paul D. at 1:19 PM 3 comments: 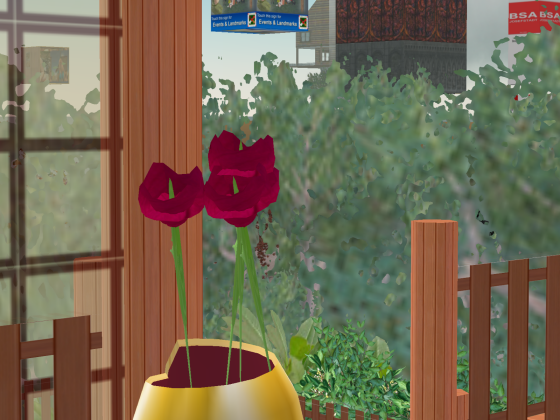 Made with sculptypaint. Each rose is 2 prims, one for the rose and one for the stem. The vase is one prim made by torturing a sphere. So the whole arrangement is 9 prims. Maybe a bit excessive, but I am still learning to manipulate sculpted prims.
Posted by Paul D. at 8:01 PM 2 comments: 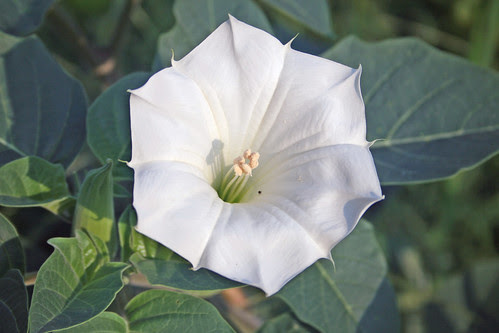 High summer is here and the warm
Annual grasses spider across the earth.
Sedums in the garden wilt.
You have to be a master gardener here
My neighbor said today at market.
We talked of worms
Wrapping her red bud in brown webs
Just a week after spraying.
The eggs were there I said
Or laid just after the chemical
Had broken down.
Kansas webworms waving
Under their palace of threads.

I pull the annual grasses from my beds
But save the Datura which wander
From year to year.
These are my plants, leaves blue
In the thick stemmed August days.
The flowers are white dresses
Worn freely in the night,
Only a surprise flash of cotton
In the rising sun.
But more buds swell greedily
Await their turns to be worn
In the August night,
More buds swollen in the invisible hand
Of persistence.


Commentary. This is the third poem that I have written over my life a poet about Datura. I am not sure why the fascination with this plant. I guess because it is so surprising. Seeing the plant in the day, flowers shriveled one might not guess just how wonderful its night blooming flowers are. I still remember the first time I saw this plant in New Mexico. We had been traveling a poorly marked dirt road and ended up winding down a steep canyon. As I came around a bend in the shadows there was this plant full of these wonderful pure white flowers. I guessed Datura, and realized that we had been driving by lots of these plants. Only the flowers were shriveled in the sun.

Sometimes we make a big deal of persistence. It is one of those American half truths. If you are persistent you can do anything or realize your dreams. Well the truth is many times you can't. That doesn't mean you shouldn't be persistent. I am not a fatalist after all. Instead the point of the poem in part is that persistence really is no big deal-it is part of our Darwinian legacy. After all, do you have any genes that were contributed by organisms who were not your direct ancestors? Granted, new forms of genes and new genes arise like buds and are passed on if persistent enough in a metaphorical sense. But these arise from mutations in genetic material passed from generation to generation. There are even so called immortal genes involved in critical biological processes which are basically unchanged, persisting today in all organisms from deep sea vent Archea, to starfish, Datura and humans. Persistence then is not always heroic, but happens quietly at a very basic level.

Indeed DNA as noted by Brenda Maddox in her biography of Rosalind Franklin "reverses the tendency of matter to become disordered and allows new molecules to be the same as the old." True, this is the persistence from which all other forms of persistence are derived from. And yet note, just as the Datura opportunistically self sow (wander from year to year), the persistence embodied in the fidelity of the DNA copying process also makes possible the natural selection of mutations best suited for particular environments. So persistence and change, opportunism if you will, are each required for the other to happen.
Posted by Paul D. at 7:03 AM 6 comments:

The Globe Theatre and a Second Life Coincidence

Last night I decided to do some prowling around Second Life and realized that I had not spent much time exploring literature in Second Life. Since I write poetry I entered poetry in the SL search engine. One of the entries was for the Globe Theatre so I decided to take a look.

If you have Second Life installed on your machine, most links will be Second Life URLs, called "SLURLS". These call up a map of Second Life and if the SL client is installed, to teleport to the location. Click the images to see larger versions to get some sense of the immersive quality of this sim.

The Globe Theatre is a nice mock up of Shakespeare's Globe Theatre complete with stage and scaffolding so that you can sit in any of the levels. I can't judge the accuracy of the details, and there isn't any offal on the floor as I suspect was the case for the original. 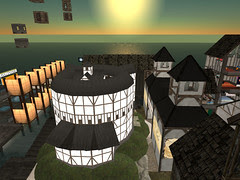 The entry to the theatre... 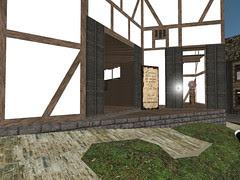 An advertisement for an obscure play... 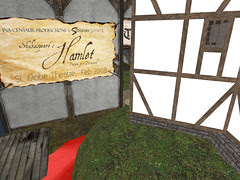 A shot of the second level showing the seats. By the way the cushions are scripted and are very polite... 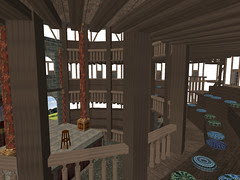 View from the stage... 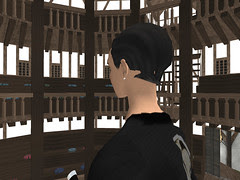 The theatre is part of a larger SL literature themed sim run by a group called SLiterary (website and events). The sim includes rental spaces for writers and other artists as well as several coffee houses including this one which periodically has poetry readings and competitions that you can enter online. Now that Second Life has voice, this may turn out to be a fun thing to try. 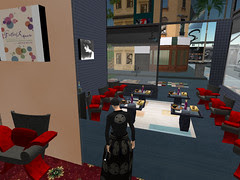 Here you can dine on sushi: virtual sushi that is. 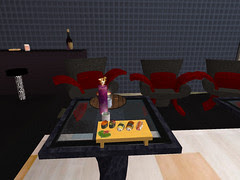 The sim isn't all serious. For example here is a whimsical tableau of a group of aliens jump starting their flying saucer from a couple of batteries, called "Greenie's Jumpstart. This object has over 100 prims. In comparison, Simeon's Home in Carmine is a 512 square meter plot with a 120 prim limit. 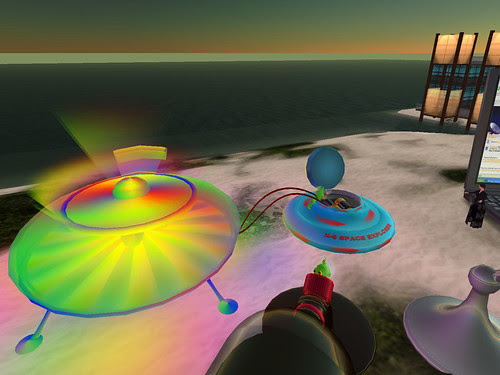 While exploring the sim, I bumped into resident Calliope Delgado who graciously showed me around and explained about how renting space in the sim works. 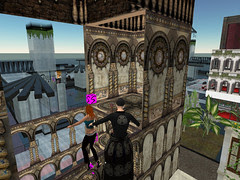 Turns out she is not only from Lawrence Kansas, but I also know her in RL. We didn't make the connection until after she had checked out this blog.

So a very happy coincidence indeed!
Posted by Paul D. at 11:15 AM No comments:

I haven't been posting or reading much this summer. Sometimes the brain just needs to do other things or be quiet. So aside from teaching and gardening I have been on hold for a bit blog wise. My main online activity has been getting a bit more into Second Life since my school is planning to get an Island. That doesn't mean I haven't been taking in some real life.

One routine we have in the summer is spending Saturday morning at the Lawrence Farmer's Market. I believe this is one of the best markets around and there is always something new. This week the Free State Fly Fishers had a booth. Now I don't fish, but I was fascinated by the flies and fly making equipment they had available.

Here are the members of the club... 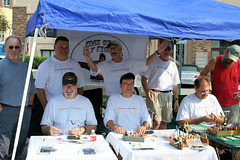 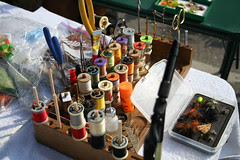 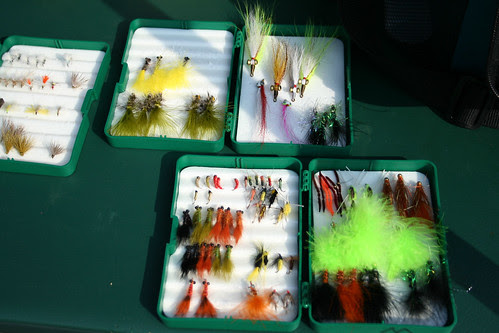 My son fishes and I actually think his fishing style is suited to fly fishing. But he figures he would get his line tangled all the time. He may be right but I did steer him toward these jolly fishers. So we will see.

By the way, the Free State Fly Fishers have web site with an appropriately Kansas logo, so hop (or flop) on over for a visit at: http://www.freestateflyfishers.org/
Posted by Paul D. at 7:13 AM No comments: