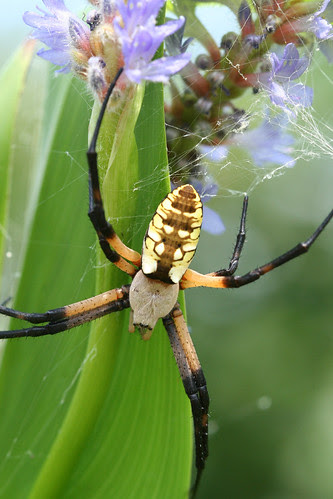 Argiope aurantia, a photo by pdecell on Flickr.
This female is was hanging around at the Nature Center near my home.
Posted by Paul D. at 7:27 PM No comments:

G+ One Week Out

G+ or Google+ is supposed to be Google's answer to Facebook. I have been using G+ for a little over a week now and so far it is a mixed bag. The good is that I can set up different circles for people I know in different contexts. This set of slides you can scroll through explains the concept quite well.

You can set up what ever circles you want and that way separate people you know say from work from those you know at the local bar....of course maybe these are the same people. That way each group gets only those posts that you think they might enjoy. It's really cool.

You can also follow people you don't know, celebrities for instance, no need to friend them. In fact there is no friend button. You can also control whether or not your posts can be shared outside your circle. Another cool feature is that you can set up a video "Hangout" for your friends and you can have a video chat with up to 10 friends simultaneously. Set up is easy- though I have not felt the hankering to actually start a "Hangout". Besides I don't have enough people in my circles to wait around for visitors. But I can see this as a good way to hold virtual office hours for students.

Google is still at the beginning of this experiment and that has led to no little controversy about Google's profile requirements. Google requires you to use your real name when setting up profiles. In fact Google has allegedly been suspending accounts if the name even sounds fake. If you want, you can also on a separate line provide other names you go by. As you might expect, privacy advocates have been upset at Google-there are after all legitimate needs for pseudonymous profiles safety being one.

Here is a good concise discussion of the issue. What astounds me is the blindness of Google executives to the whole issue. Former CEO Eric Schmidt is alleged to have said: "If you have something that you don't want anyone to know, maybe you shouldn't be doing it in the first place." Of course the fallacy here is that there are plenty of things that either you don't want everyone to know - example medical issues-. Then there are things that you might want everyone to know but not be able to trace the revelation back to you-whistle blower for instance.

At least some people in Google do understand the issue as evidenced by this post in Google's Public Policy Blog. The message seems to be that yes you can be what you want to be but don't expect to be able to use all of Google's products using a pseudonym. This is a tough balancing act for Google as it strives to integrate and rebrand it's diverse products. 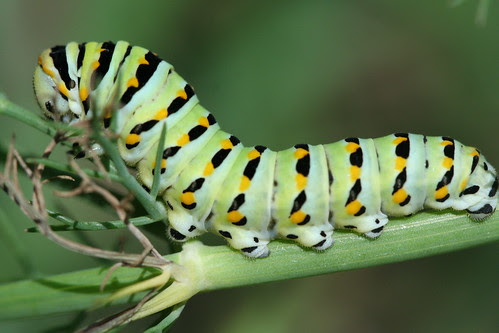 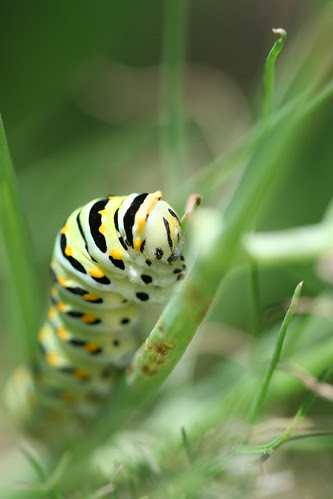 Black swallowtail larva, a photo by pdecell on Flickr.

This is the first time I have gotten black swallow tails to hatch in my garden. These are on fennel.

According to this site they also use Rue as a food plant which I didn't know.
www.glorious-butterfly.com/black-swallowtail-caterpillar....

One bad thing that these larvae do on fennel is that they don't just eat the leaves. They also bite into the stem and the stem turns yellow and wilts. You can see where this one has been biting into the stem. 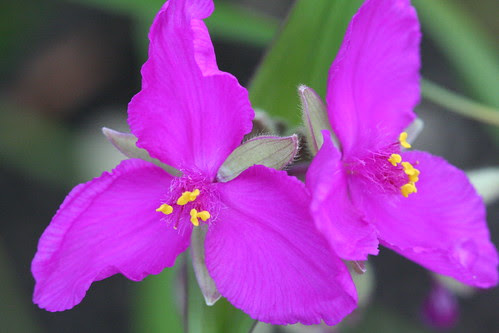 This wonderful plant was at the Boise Botanical Garden at the end of May when I was in Idaho visiting my sister.