At the base of Saunder's Mount 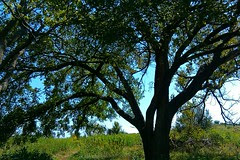 At the base of Saunder's Mount
Originally uploaded by pdecell

The sky was so blue it was holding hands with the trees.
Posted by Paul D. at 6:21 PM No comments: 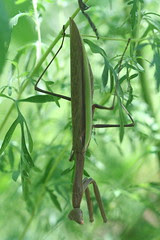 Hanging
Originally uploaded by pdecell
Saw this wonderful mantid at Prairie Park this afternoon. Just hanging out reminding me it's time to check up on climate change.

First off in California we have a voter initiative called Proposition 23 which attempts to roll back California's ambitious goals in the area of reducing dependence on fossil fuels. Who are main backers funding this proposition? If you guessed oil companies..you would be right according to this source:

By the way remember that Western Kansas representative that said global warming will be good for plant growth? Makes sense since more carbon dioxide leads to more photosynthesis, right? Well not so fast according to research reported on NASA's web site:

Apparently between 2000-2009 over all net plant growth world wide has been negative. Gains in plant growth in some areas are offset by losses due to drought in other areas. So like so many things in our grand uncontrolled experiment on enriching the atmosphere with extra carbon dioxide the outcome is a bit murky.

Speaking of murky, seemingly subtle changes in ocean characteristics may have big effects. A couple of interesting papers point out how the ocean's color and murkiness may relate to ocean temperatures and indirectly the severity of hurricanes. In a study reported in Science (http://news.sciencemag.org/scienceinsider/2010/08/sea-murkiness-affects-hurricanes.html), scientists fortuitously found that areas of the ocean with less phytoplankton in surface waters seem to have fewer hurricane type storms. This is believed to be because phytoplankton absorb light and raise the temperature of the surface waters which in turn affects the development of tropical storms. In the absence of phytoplankton light can penetrate deeper into the ocean so the surface waters don't heat up so much.

Now there may be a complex tie in with climate change. Another study discussed in Scientific American (http://www.scientificamerican.com/article.cfm?id=phytoplankton-population)looking at long term trends in phytoplankton abundance using a long term global data set suggests that phytoplankton abundance has declined by 40% since 1950. The scientists suspect that the decline is linked to warmer ocean temperatures because warmer surface temps reduce the exchange of water between the surface layers where the phytoplankton grows and cooler nutrient rich layers. To me this seems plausible since exactly this type of "stratification" is extremely well documented in the scientific literature.

The disturbing thing about this apparent reduction in phytoplankton abundance is that much of the oxygen in our atmosphere is produced by phytoplankton and phytoplankton are the base of oceanic food chains.
There is an interesting blog entry on the Accuweather web site (http://www.accuweather.com/blogs/climatechange/story/34446/global-temperature-trends-with-1.asp) looking at global temperature trends and decrying cherry picking of data by all sides in the climate change debate. Lots of graphs so you can judge for yourself.

By the way, Accuweather presents an analysis of the data for July 2010 in terms of how that fits in with long term climate trends: http://www.accuweather.com/blogs/climatechange/story/35467/observed-temperatures-from-jul-2.asp. The conclusions seems to be that July 2010 was the fifth warmest on record. To me this suggests that the much anticipated cooling trend has not been happening. Other researchers (http://data.giss.nasa.gov/gistemp/2010july/) are reporting that the first 6 months of 2010 are the warmest on record.

Note that they draw this conclusion from the 12 month running mean which includes the last five months of 2006 along with the first seven months of 2010. But again no suggestion of a long term cooling trend.

By the way, remember climate gate? Well the scientists involved have been basically cleared of any wrong doing by a British panel as explained in this article (http://www.nytimes.com/2010/07/08/science/earth/08climate.html?_r=2&src=mv) from the NY Times.

There were some problems noted by the panel that cleared the scientists.

Quoting from the Times article:

"But the panel also rebuked the scientists for several aspects of their behavior, especially their reluctance to release computer files supporting their scientific work. And it declared that a chart they produced in 1999 about past climate was “misleading.”

Personally I think there are some major issues that need to be addressed about the management and access to large data sets of all sorts, not just those related to climate change but that's a whole other topic! 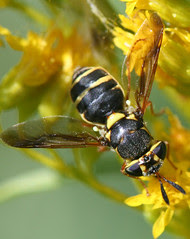 Syrphid 2
Originally uploaded by pdecell
Got this wonderful syrphid at the Ernie Miller Nature Center in Olathe KS. on Saturday. Click on the picture to see larger images.
Posted by Paul D. at 8:31 PM 2 comments:

There has been an interesting thread on my local transgender support group's discussion board about Catholicism and how someone who is transgender or transsexual can support a Church that is not at all friendly to transgender folk. This whole thing started because on of the group's other members (call her C) has recently gone back to the Church and has been sharing some of the Church's events, for instance a recent fiesta on the support group's list.
The list owner, B is a dear friend of mine and she raised a number of standard objection's to the Church's position about transgender and more specifically transsexuals. She wrote in response to a post by C:

"If you believe the Vatican is right, then you're between the rock of TS inner identity, and the hard place of a church that would, if they knew you to be TS, consider you to be a grotesque, mutant, sinner. That can't be a good feeling."

And B cited a grotesque analysis of the Church's position by a Father Saunders discussed here:
http://www.religioustolerance.org/transsexu15.htm
Father Sauders drawing on Church documents and the Catechism concludes that sexual reassignment surgery is:

"... a radical and grotesque mutilation of the body....To destroy organs purposefully that are healthy and functioning, and to try to create imitation organs which will never have the genuineness and functioning of authentic organs is gross and lacks charity. Such surgery which purposefully destroys the bodily integrity of the person must be condemned."

Pretty heavy stuff and B rightfully wonders if this doesn't leave C in a really hard place between her faith and her desire for SRS. Fair question but C has been quiet about it. Maybe she's just decided to let sleeping dogs and bad theology lie, but being Catholic and really interested in these sorts of issues because of my own gender issues I had to step in it so to speak.
My initial response was to point out that the Church's position is a bit more complex than that and does allow some wiggle room for transgender folk. In particular I noted:

"The most recent Church documents-Fr, Saunders and even the Pope are merely giving their personal opinions not official Church teaching. The Church actually studied the issue of transsexualism and released a
document to instruct the Bishops back in 2000.

A report about the document is on Lynn Conway's site..scroll down a bit to find
it.

The document is certainly not friendly to TS people but interestingly has the
following according to the report:

-- An analysis of the moral licitness of "sex-change" operations. It
concludes that the procedure could be morally acceptable in certain
extreme cases if a medical probability exists that it will "cure" the
patient's internal turmoil.

-- A recommendation of psychiatric treatment and spiritual counseling
for transsexual priests. It suggests they can continue to exercise
their ministry privately if it does not cause scandal.

So the issue is not so clear cut as one might think even though the Church is
relying on faulty information about transsexuals and transgender people.
...
"Am I happy with the general attitude toward transgender folk in the Church? Of
course not and I don't have any illusions about the sorts of hurt than can
happen to transgender Catholics who are outed. But the Church is a lot more than
the silly old men who are running it today and their lame justifications for
certain outmoded Church doctrines and practices."

Well I guess B isn't happy with my nuanced response since she has since written:

"I'm not Catholic. After reading this article, which would say I'm too unstable to marry ANYONE, and that they can tell if I have/had a "transsexual disposition" now or in the past, prior to marriage, well, I'm not a happy camper.

"No offense meant, to Catholic members, dears. I'm not upset with you. Just a theology which throws the first and second stone at me."

Obviously I have struck a nerve here- Be that as it may, the issue she implies does remain-how can a transgender person be Catholic? Here is my quick response to B slightly edited to protect the innocent:
"B:
Of course no offense taken and what you say deserves a much longer response than
is possible here. Now I can't speak for the other Catholics here, just myself,
but you are not saying anything that I haven't wrestled with and other
progressive Catholics regardless of their gender identity don't wrestle with at
various levels. And this is perhaps particularly true with the current pope
whose election was met with groans from many of my friends.

The short answer is to why I persist as Catholic has to do with the central
institution of the Church which is NOT the Pope but rather the sacrament of
communion, and the Church's rituals and sacred traditions all point to the
central tenet of the Incarnation and Resurrection. The emotional impact of the
Church's rituals and liturgy are hard to explain intellectually, especially to
those more familiar with my generally empirical stance.

J (another member) is right the Catholic Church is frustratingly slow to change; also the
Church really really has not absorbed the theological implications of modern
science and our understanding of human evolution. But of course this is not
unique to my Church!

I have a lot more I could say, but will probably defer that to a post on my
academic blog since it will allow me to pick up a thread of discussion which has
lain fallow for several years.

As always your friend!