Just in Time for Christmas...

The Pope has released another in a series of misguided statements about gender and sexual orientation, this time attacking gender theory.

It isn't at all clear to me what the Pope means by gender theory. If he means that gender is entirely a social construct a la post modernism then he is quite correct from my biological perspective. But I think he means to reenforce the standard gender binary.He says for instance:

Well, yes it is outdated metaphysics because his statement is based on the assumption that there is some sort of metaphysical essence that distinguishes us from other animals and that this essence is somehow reflected in the gender binary. What is sad is that the Pope has lots of good things to say on many levels about the dignity of people-including in this address- but saying good things but based on faulty medival premises ultimately does more harm than good.

That said, the Pope is rightfully concerned about human nature and its manipulation: He notes (quoted from Asia Times) that:

“We should re-read the encyclical Humanae Vitae starting from such a perspective. In it Pope Paul VI’s intention was to defend love against a utilitarian view of sexuality, the future against the exclusive claim of the present, and man’s nature against its manipulation.”

and here he is a on target just as he is generally on target when it comes to issues of human dignity. But it seems he clings to outmoded typological thinking because it provides clear rules whose descendent, by the way, is the 1960's slogan "If you are not part of the solution you are part of the problem". We are moral animals, and moral animals capable of looking beyond the short term-taking an ethical progression outward from ourselves and immediate familiy to all of creation and taking it forwards in time to contemplate what we want our species to become.

Just because the Pope's essentialist assumption is flawed doesn't make his concerns any less valid-but again some of his conclusions, drawn from wrong premises (that creation implies an essential nature) can lead to great harm, something I really don't think he really intends inspite of his bullheadness about gender and sexual identity.

I really don't think he means for me to feel less than human because I don't fit his notions of male and female very well. He probably thinks a bit like Rick Warren who said well gee I have gay friends, I have been to gay people's houses. The essentalist stance leads to a debasing of human dignity, there very things that the Pope and Warren claim to be defending.
Posted by Paul D. at 7:42 AM 1 comment: 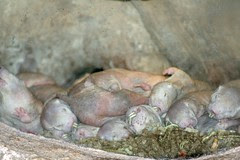 See naked mole rats here!
Originally uploaded by pdecell
...at Disney's Animal Kingdom over Thanksgiving. Nice exhibit except they really don't explain why these mammals are so interesting. What makes them so interesting is that they are the most like social insects of any mammal. See...

Of course maybe the Disney folks would have to then explain why social insects are so important in the tropics in terms of the functioning of tropical ecosystems and how social insect biomass dwarfs that of the charismatic animals they have in Animal KIngdom.

Then they would have to explain why it is that you have to really hunt to even see an ant at any of the theme parks.
Posted by Paul D. at 9:22 PM No comments: