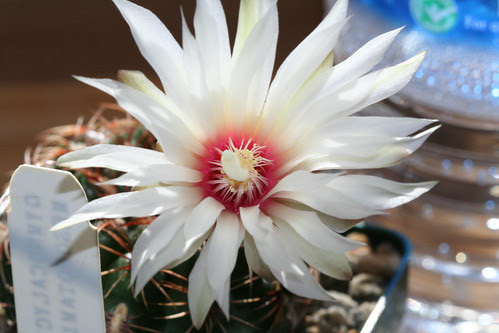 Except for a couple of Dendrobium and a few paltry crown of thorns this Gymnocalycium is about the only thing blooming in my house right now. Normally a not very exciting bloom but when the light hit it just right the other day I had to get some shots.

Even the most ordinary can be beautiful in the right light.
Posted by Paul D. at 7:49 PM No comments:

Save the Sea Kittens?

The People for the Ethical Treatment of Animals(PETA) has a new campaign, this time against fishing complete with a splashy new web site designed to hook unsuspecting visitors. The site claims that:

"People don't seem to like fish. They're slithery and slimy, and they have eyes on either side of their pointy little heads—which is weird, to say the least. Plus, the small ones nibble at your feet when you're swimming, and the big ones—well, the big ones will bite your face off if Jaws is anything to go by. "

Hence the make over. The site has places for "Sea Kitten stories" , petitions urging the US Fish and Wildlife Service to stop promoting fishing, oh and if you want you can even buy a Sea Kitten Hoodie-imagine the fashion statement that would make at school or in the neighborhood! Another page makes the PETA case a little bit more directly noting quite properly that fish are quite smart, capable sophisticated sensory and cognitive feats and therefore (their leap of logic not mine) ought to not be subject to the cruelty of fishing.

Now the notion that animals are cognitively aware at least of the present does give some moral weight to the notion that we ought to minimize human caused animal suffering and that animals ought to be respected for what they are, but really PETA's effort is a blatant attempt to exploit the healthy sense of empathy that most people have about animals rather than encouraging people to see animals (including ourselves) in a balanced way.

Also Leopold in one of his Sand County Almanac essays argued that in order for people to understand the value of conservation and "The Land Ethic", they have to have an emotional connection to the land. I agree but I don't think that this misplaced empathy is what he had in mind.

By the way, there is a very interesting essay on the Ethics of Eating Animals in Michael Pollan's recent book, Omnivore's Dilemma which tackles animal rights in a more balanced way. Pollan concludes that:

"To give up eating animals is to give up on these places(nota bene: where animals live) as human habitat , unless of course we are willing to make complete our dependence on a highly industrialized food chain."

Now that is a good omnivore attitude!

I recommend Pollan's book as a corrective to anyone who might otherwise be susceptible to the simplistc arguments that PETA foists an all us kitten lovers.

Full disclosure: I have 2 Kittens; well they used to be Kittens. One of them has eaten fish the other one wouldn't have the first notion what to do with a fish. I have been fishing, in fact for catfish. And yes this omnivore did eat them.

Welcome to the Holidays in My World 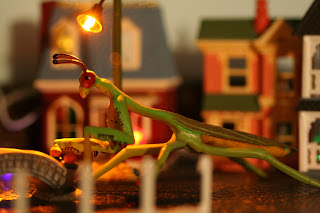 My wife would not let me put my dinosaurs in her Christmas village. But she didn't say anything about large predatory insects.
Posted by Paul D. at 3:12 PM No comments: