Here are two articles that could have been in the Onion but are meant to be serious.

First we have "The Danger of Celebrating Halloween".
http://www.charismamag.com/index.php/prophetic-insight/23723-the-danger-of-celebrating-halloween

This was posted on the CBN web site but was removed so I guess it was even too loony for Pat Robertson. My favorite part?

"During this period demons are assigned against those who participate in the rituals and festivities. These demons are automatically drawn to the fetishes that open doors for them to come into the lives of human beings. For example, most of the candy sold during this season has been dedicated and prayed over by witches."

Next we have this wonderful gem and title pretty much sums the article up:

"The Golden Girls: How One TV Show Turned A Generation Of American Boys Into Homosexuals"

My favorite part of this article:

"The 1980s was an epoch of President Reagan’s manly wisdom and the terrifying threat of Cold War annihilation. America had sobered up from the flashy lights of 1970s disco. We were skipping all night cocaine and sex parties to focus on our careers. Spiritual leaders like Jerry Falwell were telling us that Christianity was in the majority again. On the other side, there was a subculture of homosexuality creeping up on our youths. It gave them an excuse to wear tight jeans and to sneak off to public parks for quick releases with hairy men of different ethnicities."

For the record I was not a fan and am not a fan of Golden Girls.

Tip of the Antennae to an anonymous blogger friend with whiskers for calling my attention to the first article.

And darkness falls as happens each year when the planets
Turn their eyes from the sun and clouds lid the earth
Wind whip drives the rains raw, what leaves are left
Excoriated by its sharp tongue

And darkness falls even in mid-day through the branches
Now stilled and fires banked smolder in your buds
I feel in vain amongst the thorns on your rough trunk
Until I feel the littlest promise of light
For me to cling
Posted by Paul D. at 8:28 AM No comments:

I am no fan of FOX News but I think MoveOn.org's latest campaign to get Democratic Party leaders to stay off that network maybe counter productive. MoveOn.org's e-mail to its members including yours truly says in part:

Now, President Obama is fighting back. The White House communications director said FOX is a "wing of the Republican Party...let's not pretend they're a news network."2 To draw attention to its biased coverage, President Obama will not appear on FOX for the rest of this year.3


It's about time Democrats stood up to FOX! Can you sign this petition asking Democrats to support President Obama's stance by staying off FOX as long as he does? "

Sometimes a boycott can be effective but this one seems likely to promote more FOX network distortions and maybe further unmoore FOX and its supporters from reality. I suggest a two pronged approach if people really feel the urge to boycott FOX. First get MORE Democrats on FOX news and make sure that they are schooled in how to defuse FOX commentator rhetorical tricks.

Second Democrats should boycott FOX and let their cable companies know what they think about FOX. Viewers are after all is what FOX needs to survive. Democrats might also consider avoiding other FOX assets such as Myspace. Here is a list for instance internet assets:
http://en.wikipedia.org/wiki/News_Corporation#Internet

I know, herding liberals and Democrats is like herding cats, but using the channel changer, and your mouse to Click FOX off is probably the best thing to do here. Liberals and moderates are a big enough group that clicking FOX off ought to be a more effective mass strategy.
Posted by Paul D. at 8:36 AM No comments: 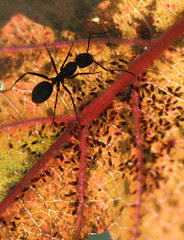 My kind of fall leaf shot. From Mary's Lake in Lawrence Kansas. Th ant is Camponotus and is presumably collecting honey dew from the aphids.
Posted by Paul D. at 7:04 PM No comments: