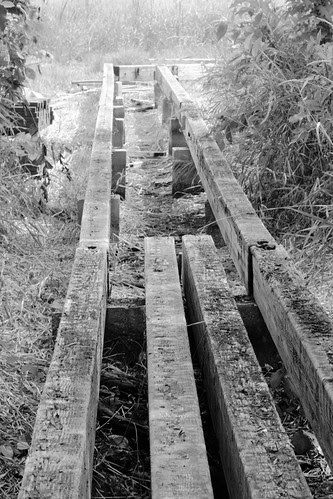 Good Bye Old Friend, a photo by pdecell on Flickr.
This is what's left of the old boardwalk at Baker Wetlands, south of 31st St in Lawrence. It is being dismantled to make way for the east leg of the South Lawrence Trafficway.

My son and I spent much time here when he was growing up and it was one of my favorite photo areas. Sure there is a new fancy board walk in the mitigation area but it is not as intimate, being higher above the wetlands. Maybe when the new wetland areas are better established it won't seem so out of place. Maybe other parents and children will make find it a friend as we found the old boardwalk. 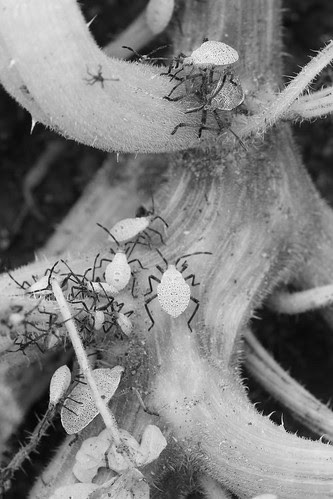 Do you think maybe I waited too long to treat my squash plants? What's weird is that these squash bugs don't seem to like cucumbers even though cucumbers are in the squash family.

Via Flickr:
Do you think maybe I was a little late in treating my squash plants? 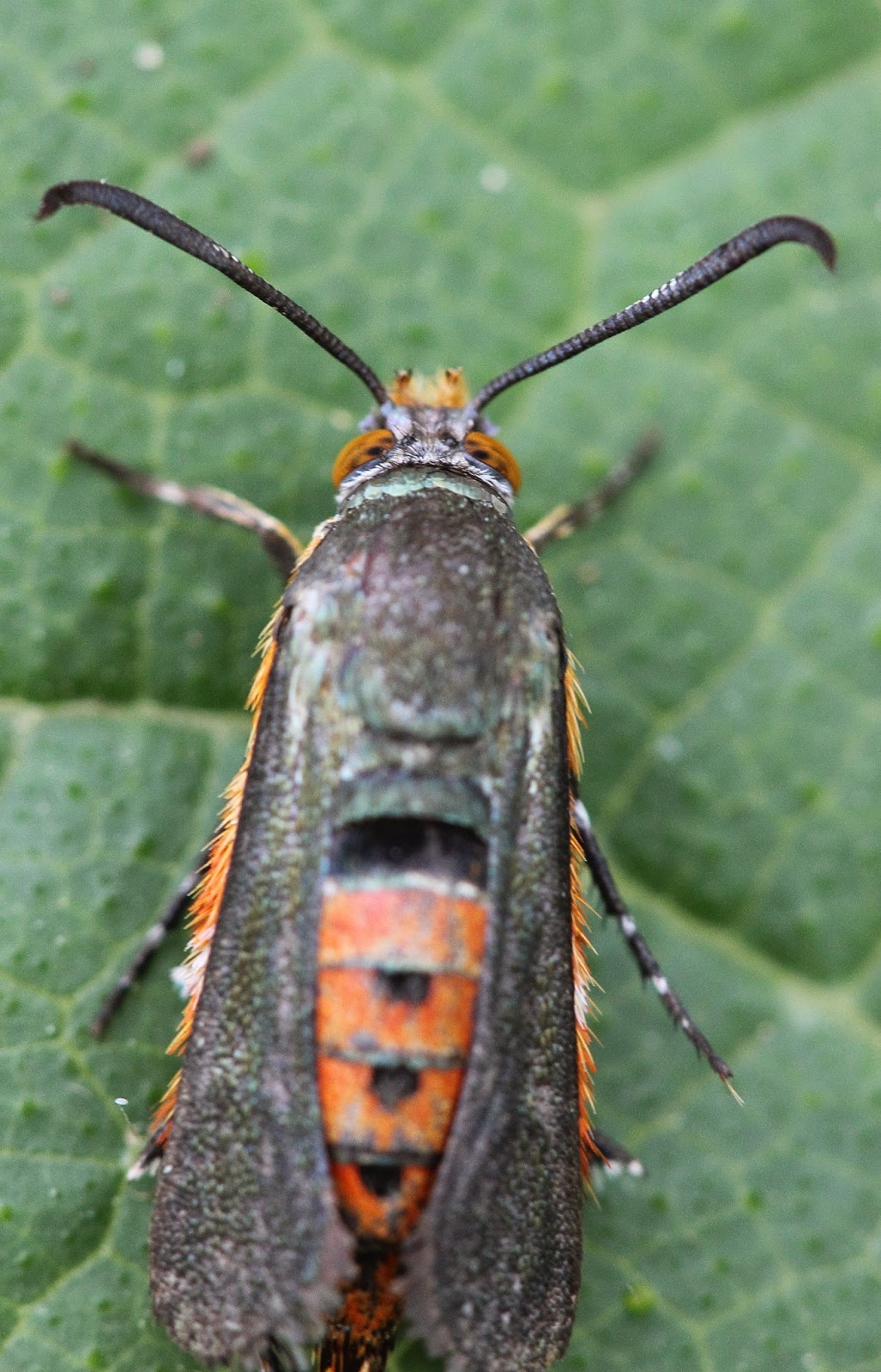 On Tuesday I found this moth visiting my squash plants and not to admire them. This is a moth called the Squash Borer since the larvae bore through the stems of squash plants.

The other day I visited my son who is stationed at Fort Riley Kansas. So since we both like to hike and neither of us have spent much time in the Flint Hills we headed over to Konza Prairie near Manhattan KS.

Of course what is a biologist going to use mesh to do...make cars? 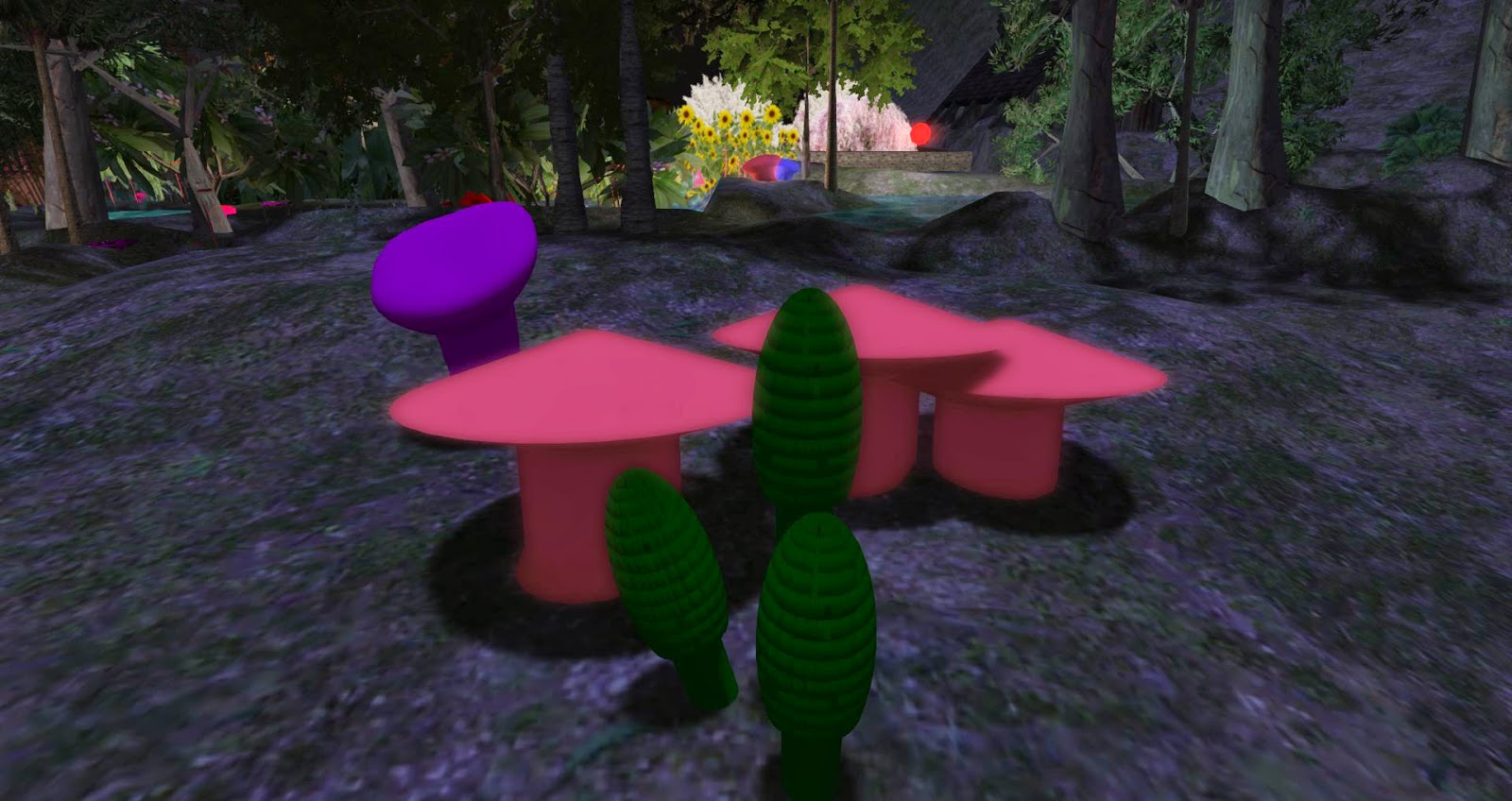 Here are some of my first attempts at mesh modeling in Second Life. The mushrooms weren't too bad in terms of cost to upload and for land impact..but the green Equisetum inspired plant cost 30$L to upload the model. I wasn't taking particular care  to optimize the mesh.  Probably wouldn't have been too expensive but I extruded the mesh in the tops to get that texture and I think that is most of the cost.

But sounds like another reason to go to an Open Sim grid.
Posted by Paul D. at 2:17 PM No comments:

Sometime ago I posted about a script generator for Second Life based on Scratch. The idea is is to graphically generate LSL script by first fitting program blocks together. The original Scratch generator was out of MIT. The MIT Scratch site is here: http://web.mit.edu/~eric_r/Public/S4SL/.  Recently a Flash based Scratch LSL generator has been put together by John Bennett from the University of Colorado to help introductory computer science students learn to think computationally. 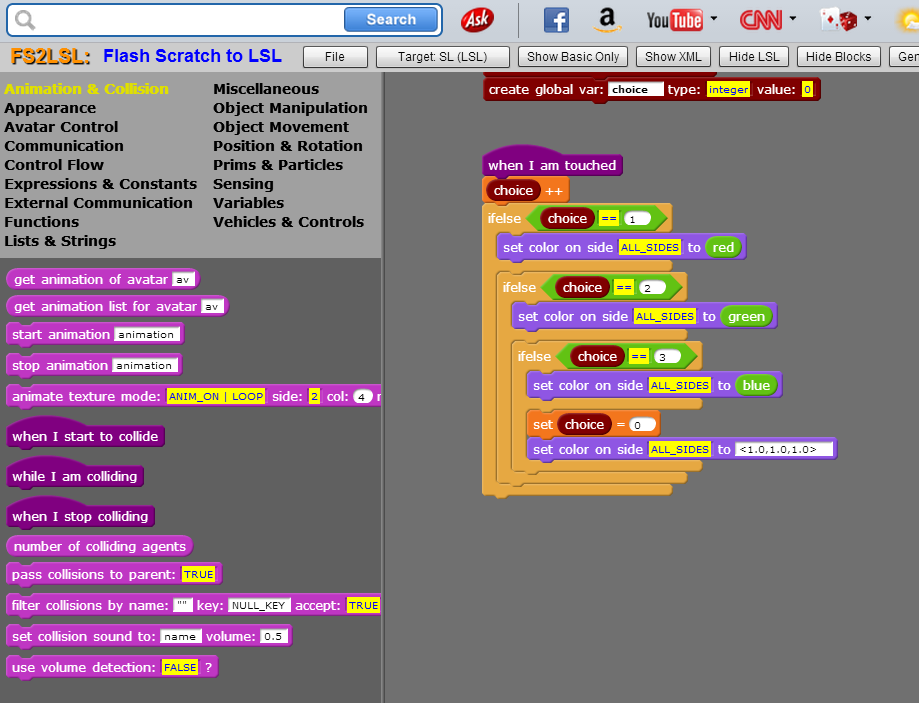 The interface is similar to the MIT Scratch for LSL,  The new Lash version is called called FS2LSL. Here is the interface along with a real simple program to change the color of a prim from red to green to blue and to white, shown in Scratch blocks.


The LSL code generated by FS2LSL can then be copied and then pasted into Second Life or other viewer's script editor.  Granted, my program is super-simple but it gratifyingly worked without any modification. The code is well laid out and some automatic commenting related to the program is generated. The web site for FS2LSL gives lots of good examples many of which are from Scripting Your World: The Official Guide to Second Life Scripting. 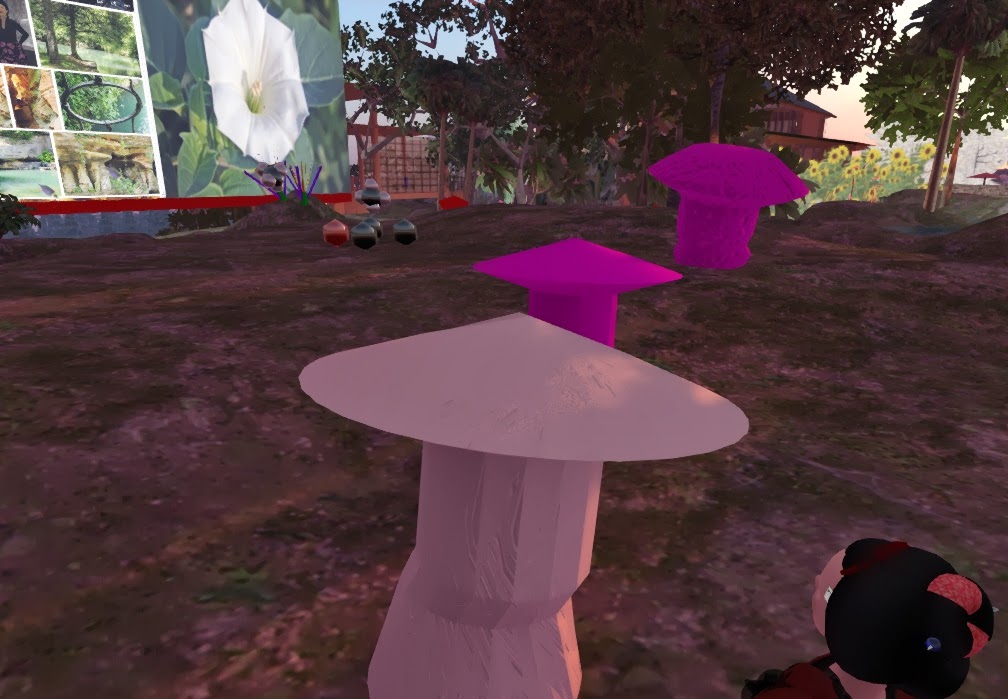 Most of the basic elements of the LSL language are covered, but don't expect to make complex menus and don't expect to find more than a few math functions built in. But you do have the ability to make your own functions. I appreciate that there is good coverage of control structures and if you work with IF statements you might find FS2LSL useful for working with them.


I am not an expert LSL programmer; It took me forever to understand events and states for instance but I think FS2LSL is potentially useful not just for beginners but people such as myself who are trying to improve their programming skills. Certainly anyone just starting programming in LSL either in Second Life or OpenSim's version of LSL will find this tool useful, though it may not be completely compatible with OpenSim's version of LSL.

The Link to FS2LSL's page and examples is http://redwood.colorado.edu/jkb/fs2lsl/. The link to the actual Flash program is at http://www.free-lsl-scripts.com/Secondlife/Posts/fs2sl/