A look at Kansas climate for 2012. Just how bad is it out there? 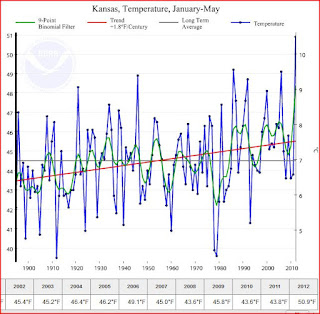 Given all the talk about how hot it has been and the severity of this years drought, I put together a historical look at Kansas climate in terms of temperature and a drought severity index. Rather than repeat it here hop on over to my science blog at the Lawrence Journal World.
http://www2.ljworld.com/weblogs/dangerous-ideas/2012/jul/21/so-how-does-2012-stack-up-weather-wise/
But you might find my conclusions interesting so I will repost those here:

2012 does not even come close in severity to the earlier droughts, including some relatively recent droughts of the 1980's. What is interesting is that the Palmer index suggests that the drought of the mid 1950's was in some respects more intense than the drought of the 1930's.
So the data suggest that yes it has been really abnormally warm so far in 2012. On the other hand the Palmer data suggest that the current drought is not (At least through June) as severe as a number of other droughts we have had.
One problem we have of course looking at historical data is that agricultural practices have changed since the 1930's. Much of the marginal land that was farmed then is not farmed now or is farmed using large scale irrigation. Farmers today tend to use tillage and other conservation practices that that probably are moderating local temperature and precipitation to some degree compared to earlier years. This might explain the greater number of extreme highs during the 1930's when conservation practices were not as widespread.