Circus of the Spineless #16 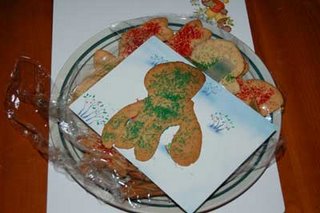 Merry Christmas or as PZ Myers might rather say: "Merry Cephmas." His Cephmas cookie is to the left used with his kind permission.

At the Annotated Budak, Marcus Ng starts us off with a couple of nice bee pictures right up my alley including a huge Xylocopa latipes.

Many of my readers know that my masthead features a Xylocopa virginica, impressive enough in flight but I would love to see X. latipes in action!
He has a nice stingless bee photo as well.

Speaking of Hymenoptera, Karen from Rurality blog submits some pictures of mud dauber nests, I am not sure which one this is. She found these on a tree trunk, and notes that she normally finds them on manmade structures.
http://rurality.blogspot.com/2006/12/stings.html

As an etymological aside, down South she calls them dirt dobbers, rather than mud daubers which is, as she notes, a more familiar term for our Northern readers. Not to digress but my wife plays bingo with her mom and bingo players often use ink filled bottles with a sponge top to mark the squares on their cards, and these are called (at least here in Kansas) "dabbers" but pronounced 'dawber' as I would pronounce 'dauber'.

Yet another insect post from "A DC Birding Blog" this time of an Eye elator. Too bad the specimen was dead because this is another really impressive insect in life.
http://dendroica.blogspot.com/2006/12/eyed-elator.html

Some last moment insect entries include a Syrphid fly from Jennifer Orth, and a couple from Bev at Burning Silo:

We rented Pirates of the Caribbean Dead Man's Chest over Christmas and of course the star of the movie as far as I was concerned was the the giant squid. So from Craig at Deep Sea News comes a comes a link to a video of a giant squid, a young female, only 24 feet long.
http://scienceblogs.com/deepseanews/2006/12/kraken_video.php .

PZ Myers, of course, also has a lengthy thread related to this video at Pharyngula. By the way, I guess this PZ Myer's Babe in a Manger (**eg**):
http://scienceblogs.com/pharyngula/2006/12/friday_cephalopod_adorable_bab.php

The video is not the best quality and the best stuff is toward the end, but it does show the sponges in context. What seems to be a very confused slug provides a little mystery in this amusing entry from snailstales:
http://snailstales.blogspot.com/2006/11/funeral-march-for-dead-slug.html

Is it true that a dead slug tells no tales?

PZ Myer's submission this month introduces us to the higher levels of animal phylogeny:
http://scienceblogs.com/pharyngula/2006/12/superclades_of_the_cambrian.php. He introduces us to the lophotrochozoa, an assemblage of animals including mollusks and annelids along with some wonderfully obscure and interesting creatures such as the Acanthocephala. One of the commenters, by the way, posted a link to this tree of life based on ribosomal RNA sequence comparisons.
http://www.zo.utexas.edu/faculty/antisense/DownloadfilesToL.html
This can be printed out in a large format for your wall or where ever.

Finally a couple of crustacean entries. First up from Jennifer Orth's Invasive species weblog is a report of a newly reported invasive shrimp species in the Great Lakes. This is the 183rd invasive species known to have entered the great lakes:
http://invasivespecies.blogspot.com/2006/12/shrimply-worst.html

She provides a link to a paper by Ricciardi and Rasmussen who discuss some of the characteristics shared by invasive aquatic species and how various sorts information of might be used to predict which species are likely to invade the great lakes. The shrimp happens to be from the same Black Sea area from which the Zebra Mussel originated.

The last crustacean entry is my own, quite fortuitous entry about PREHISTORIC SEA MONSTERS, actually a Branchiopod called Triops being marketed by the Smithsonian Institute in little rearing kit similar to those for "Sea Monkeys".
http://theforcethat.blogspot.com/2006/12/prehistoric-monsters.html
I was not familiar with these critters and plan to rear them out this spring at school. If you are looking for a possible gift for a child or child like adult for next Christmas, these kits may be available in your area on closeout.

Enjoy December's spineless offerings. The upcoming schedule for the Circus can be found at the Circus's home page.
http://invertebrates.blogspot.com/

The submission rules are at: http://invertebrates.blogspot.com/2005/09/rules-dudes-and-dudettes.html

However mean your gold in wow life is,buy wow gold meet it and live it ;wow gold cheap do not shun it and call it hard names.It is not so bad as you are.It looks poorest when you are richest.The fault-finder will find faults in paradise.wow gold kaufen love your life,poor as it is.maple meso You may perhaps have some pleasant,thrilling,maplestory power leveling glorious hourss,even in a poor-house.The setting sun is reflected from the windows of the alms-house as brightly as from the rich man's abode;the snow melts before its door as early in the spring.sell wow gold I do not see but a quiet mind may live as contentedly there,cheap mesos and have as cheering thoughts,as in a palace.The town's poor seem to me often to live the most independent lives of any.May be they are simply great enough to billig wow gold receive without misgiving.Most think that they are above being supported by the town;powerlevel but it often happens that buy maplestory mesos they are not above supporting themselves by dishonest means.which should be more disreputable.Cultivate poverty like a garden herb,like sage.Do not trouble wow powerleveln yourself much to get new things,maple mesos whether clothes or friends,Turn the old,archlord power leveling return to them.Things do not change;we change.Sell your clothes and keep your thoughts.