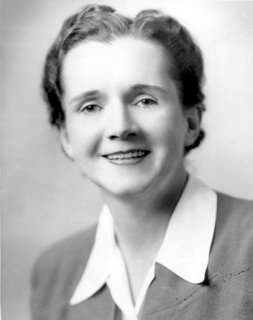 The World Health Organization has reversed its opposition to using DDT for controlling Malaria arguing that recent scientific evidence suggests that indoor spraying of DDT is a useful prevention measure that does not lead to significant health risk with proper use.

See this NY Times report, and this more in depth and balanced report also from the times.

What is interesting and perhaps not too surprising is the response of many right wing writers, for instance Linda Makson over at Frontpage Magazine. She comments that:

"A pandemic is slaughtering millions, mostly children and pregnant women -- one child every 15 seconds; 3 million people annually; and over 100 million people since 1972 --but there are no protestors clogging the streets or media stories about this tragedy. These deaths can be laid at the doorstep of author Rachel's Carson. Her bestselling book Silent Spring detailed the alleged "dangers" of the pesticide DDT, which had practically eliminated malaria."

And quoting another expert:

""Carson and those who joined her in the crusade against DDT have contributed to millions of preventable deaths. Used responsibly, DDT can be quite safe for man and the environment," Koenig said, summing up what many infectious disease experts believe. "

Others have charged that Carson out and out lied.

But is Rachel Carson really to blame for millions of preventable deaths? What's going on here that one of the founders of environmentalism is today getting dissed?

Some of Carson's opponents claim that Malaria mosquitoes have not developed resistance to DDT, but the development of resistant strains is one reason for the decline in use of DDT, at least in India. More importantly, according to a major review of the Malaria situation in Africa it is a lack of political will that seems to be the problem, rather than any issue with DDT.

Further, according to an article in allafrica.com, Malaria's increase is due more to poverty rather than the banning of DDT. An article in The Nation concurs and further observes in contrast the claims of Carson's critics that:

"The second problem is that the world did try to wipe out malaria using DDT. That campaign, launched by the WHO in 1955, eradicated malaria from a few marginal areas in Southern Europe and a couple of islands. But in places where malaria reigned supreme, it failed miserably. That isn't because they didn't have enough DDT but because the stuff stopped working. Malarial mosquitoes resistant to DDT cousin Dieldrin emerged in Nigeria as early as 1955. Malarial mosquitoes in Venezuela had learned to simply avoid DDT-sprayed walls and bite people outside by 1957. By 1972, when the United States finally banned DDT, nineteen species of malarial mosquitoes had already become impervious to the toxin."

Carson's critics berate her for claiming that DDT is carcinogenic. Here they may have a point on the surface. There does not seem to be evidence that DDT is a potent carcinogen, as concluded in this recent article. But one has to judge Carson's message in the context of its times, when we did not have good information about carcinogens. What was clear is that the persistent breakdown products of DDT can and do spread through ecosystems and build up in fatty tissues. Indeed animals including humans do seem to have good defenses against both natural and man made chemicals. But given the well known carcinogenic nature of many chlorinated hydrocarbons, Carson's warning about DDT seems warranted given what was known at the time. Indeed chlorinated and brominated hydrocarbons are some of the most potent carcinogens known.


So what's going on here? Seems to me that jumping on Rachel Carson is a political move from certain freemarket conservatives, whose antipathy to the environmental movement is well known. For instance some of the harshest critiques of Carson are found at the site Junk science. This site is largely the product of Steven Milloy who just happens to be on the receiving end of money from Phillip Morris. The Junk Science site has been heavily criticized as not really being about junk science. . See this criticism from the Skeptic's Dictionary which says of Milloy:

He describes junk science as "bad science used to further a special agenda." Those who employ junk science, according to Milloy, are the media who want to advance their own and their employers' social and political agendas; personal injury lawyers extorting deep-pocket businesses; the "food police," environmental extremists and gun-control advocates; government regulators who want to expand their authority and increase their budgets; businesses who bad-mouth competitors' products or make bogus claims about their own products; politicians who try to curry favor with special interest groups or be "politically correct"; scientists seeking fame and fortune; and ill individuals who use junk science to blame others for causing their illness.

Ah ha! We should have known! The deaths of millions of people due to Malaria is because of liberal pinko gun control advocates. Picking on Rachel Carson sounds to me eerily like the right's vilification of Charles Darwin. Should DDT be used in Malaria control? Perhaps it should, but to blame Rachel Carson for the deaths of millions inspite of ample evidence is grossly irresponsible.

More sympathetic viewpoints on Rachel Carson include this one by TR Hawkins in Environ Health Perspect. 1994 Jun-–Jul; 102(6-7): 536-–537. He observes that criticism of Carson about the carcinogenicity of DDT is really a diversionary tactic since she was concerned about so much more than that. Hawkins notes in particular:

The persistence of Silent Spring as an
environmental touchstone has been its
accuracy in predicting emergent issues.
Early response to Carson's book centered
on concerns about effects on wildlife and,
in human terms, on environmentally
mediated cancer. But Carson specifically
mentions human reproductive effects as a
possible disease endpoint for environmental
exposures, an area of concern that is just
now receiving greater scientific attention.

Carson clearly does not bear any blame for the persistence of Malaria, which is due to factors unrelated to DDT use, and her warnings were NOT out of line with what was known or suspected at the time. Carson did not oppose all use of pesticides, but rather opposed the excessive and improper use of pesticides. These chemicals do not target specific pests and it is there that lies the danger. I wonder if her opponents would be singing the same tune today if we still had the sort of lax approach to pesticides such as DDT, and did not get Carson's warning to develop better regulation and less persistent pesticides. I wonder if Milloy and his allies really want to go back to the bad old days of pesticide wild wild west.

This is another Milloy article that claims that global warming is alarmist and the the same anti DDT people are responsible for this alarm. See the Competitive Enterprise Institute's site for their political stance on a range of issues. To be fair many of there ideas are fine in terms of providing incentives for conservation. For instance I am no fan of ethanol production and neither is the CEI.

a balanced look at Carson and her legacy.

The Wikipedia entry on Rachel Carson is reasonably balanced and has some useful links.

Technorati Tags(for all it's worth. Technorati has stopped updating its links for me):
insects
science
Rachel Carson
Posted by Paul D. at 7:00 PM

Always interesting to me to hear how deep the right-wing's sticky little fingers can reach. I wonder if any criticism is ever pure anymore, or if everyone has an agenda? Hard to tell, but interesting post. Thanks for sharing.