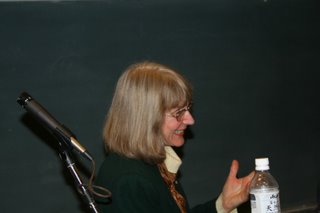 Eugenie Scott, Executive Director of the National Center for Science Education gave a very nice talk at JCCC titled Politics, Education and Evolution. Her talk, summarized her thoughts on why education has become so politicized in America. Her analysis centered on several basic areas. First the settlement patterns in America tied to the frontier led both to a decentralized educational system and to a variety of home grown religious traditions.

Next she gave a brief review of the meaning of evolution in a very general sense, dividing biological evolution into three big ideas. First is the notion of common ancestry-the genealogical approach to evolution. Next are the processes of evolution including Darwin's core idea of natural selection and finally the patterns of evolution. She noted that creationists often times make category errors, namely concluding that arguments about the mechanisms of evolution mean that evolution is wrong and she contrasted the genealogical approach to the great chain of being. She clearly explained that the great chain of being namely that fish evolved into amphibians which evolved into reptiles which evolved into mammals etc, is wrong since the common ancestors did not closely resemble their modern counterparts.

From my way of thinking the confusion between the genealogical notion of evolution and the great chain of being probably relates to a question I am often asked about humans, namely if humans evolved from apes why are there still other apes? My response is usually that modern apes and humans are descended from a common primate ancestor who doesn't exist any more. Modern apes and humans are adopted to their particular modern environments so that there is really no reason to ask why apes still exist.

So why is intelligent design so popular inspite of the lack of scientific credability? In part she attributed this to Intelligent Design marketing around what she called the three pillars of creationism: evolution is weak science; evolution and religion are incompatible; and finally the fairness argument. Now the rhetoric of intelligent design is shifting language again to a mention of critical thinking, teaching the controversy or all theories. Of course as she noted, science is not some sort of democracy and "cheerfully discriminates against those ideas that don't work.

Another aspect of the staying power of intelligent design is public confusion over the way science defines terms such as theory, law and hypothesis are used in science versus the every day use of these terms. In science these terms have specialized meanings as "terms of art". Finally Intelligent Design advocates conflate the methological naturalism of science and its limitation to natural explanations, with atheism. 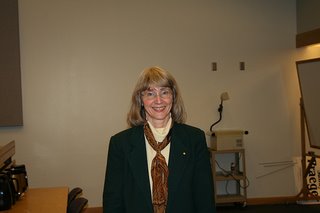 She also attributed the recent upsurge in antievolution activity to the demands of the No Child Left Behind Act and the notion that what is in curriculum standards will be tested, hence a demand for teaching the controversy and analyzing the weaknesses of evolutionary theory. She exhorted her audience, especially the students present to learn about the issues and candidates and vote, reminding the audience that we do get the officials we deserve.

It was a real treat to have her visit us given her schedule and I want to again thank her for coming, Kansas Citizens for Science especially Jack Krebs and Keith Miller for helping arrange her visit. She had given a lecture on Friday at Kansas State's Center for Origins and will next be in Kansas on November 16th speaking at Kansas University's series "Difficult Dialogues at the Commons".

Kansas City Star Editorial on Kansas Board of Education

Evolution Resources from the National Academies

Eugenie Scott is an atheist stooge pushing her atheists agenda.

Someday I am going to write a little dictionary translating all these code words used in politics from the left and the right...so for instance:

Propaganda. noun. An argument leading to a conclusion with which one does not agree.

Atheist: noun. someone who believes in fewer god than one does.

Stooge: noun. Someone articulating
an argument with which one does not agree.

Now use all these words in one sentence!

Oh and Mr Disciple try substituting your real name for Eugenie Scott, Creationist for atheist and atheists and maybe you will come to understand why Kansas voters are fed up with politcal name calling.

Oh if you don't get the point, let's try it:

How does that feel to you, eh?

Those are pretty good summaries Paul. I'm glad that Goldstein's disciple is learning well from his ill educated mentor.

The only thing I'm going to have to disagree with you on is your definition of atheist that he uses. In his context, and the context his teacher uses, atheist has nothing to do with a belief in Gods. It should be defined thusly:

In this case, it's easier to brand anyone disagreeing with a pejorative that's guaranteed to get the idiotic portion of Kansas all riled up regardless of their religious orientation.

Of course I am not sure that the definition of Atheist is exactly what he uses-actually I was thinking of a comment Dawkins makes in the God Delusion which is something to the effect that we are all atheists when it comes to the Greek pantheon. Probably in the context of the point I was trying to make, "your" definition of atheist is more appropriate.

We both agree on the main point I think.