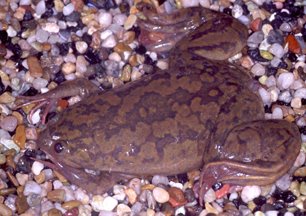 Now this is so bizarre at first glance it has to be true. According to an article from Reuters, a chytrid fungus that is currently devastating frog populations around the world may be linked a formerly common test for pregnancy. Urine from the a woman was injected into female African clawed frogs and if the woman was pregnant the frogs would be stimulated to ovulate by the hormones in the woman's blood.

The tie in to the fungus? It turns out that the African clawed frog is a vector for the fungus, not harmed by it but able to carry it to other frogs when the African clawed frogs were inadvertently or intentionally released in areas in which they are not native. The fungus is believed to be be a major factor in the decline of at least some frog populations.

The African Clawed Frog is a common aquarium animal and in certain parts of the world is an invasive pest in it's own right. See for instance http://www.calacademy.org/science_now/invasive_species/African_clawed_frog.html

The African Clawed frog or Xenopus is a common experimental animal. In fact, as an historical aside, a gene from Xenopus was the first animal gene cloned and inserted into the genome of another organism back in 1973 (http://www.genome.gov/Pages/Education/Kit/main.cfm?pageid=11).

Image from http://www.werc.usgs.gov/fieldguide/xela.htm
Posted by Paul D. at 8:58 PM

If African Clawed Frogs (AFKs) are invasive pests then so are humans. Although Frog does disagree with the former use of AFKs for pregnancy tests, Frog does not mind the scientific experiments; after all without them Frog would not be a genius frog on the Earth's moon.

I heard about another article, maybe in Nature, that this was linked to global warming. The change in climate caused it to be cloudier, so that the fungus grew more. Did you know anything about that?

Finally got around to googling this. Have not seen the original article yet so can't evaluate it scientifically but here is a reference to a report: