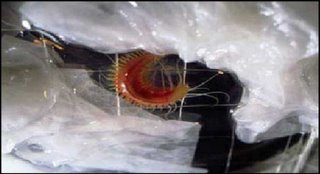 One of things I love talking about in biology are some of the extreme places where life can be found. For instance we know that certain single celled organisms in the Kingdom Archaea, live in environments that are either too hot, too cold or too salty or just about too extreme for any other living organisms. In fact, I like to call them the Xtreme sports specialists of biology. But other types of organisms give them a run for their money and have been broadening our understanding of where life, even complex life might be able to survive. The picture is of a Methane ice worm from http://www.mms.gov/eppd/sciences/esp/hydrates/

An article from Yahoo discusses a kind of worm, closely related to earthworms that thrive in glacial ice and in fact seem able to carry out their entire life in and on ice. Given that these worms are "cold blooded" and quite tiny as well, that is quite a feat. In fact these worms apparently die at temperatures above 40 degrees F. How they survive the cold is not entirely clear.

One possibility is that they have enzymes that work best at low temperatures, perhaps modified circulatory fluid. One intriguing report has looked at a wide range of these cold thriving organisms or psychrophiles found in four kingdoms of life and found that at least part of the secret to how they thrive in the cold involves increasing the concentration of AMP, ADP and ATP, energetically important compounds. By keeping the concentration of these important compounds high, the organisms appear to compensate for reduced enzyme activity since higher concentrations of reactants increases the rate of chemical reactions.

It turns out that when you search for "ice worm", a second kind of ice worm will come up. This second one lives also at cold temps but rather than glaciers this worm live around deposits of methane hydrate. These worms are also annelids as are the glacier ice worms but they belong to a different group of annelids called Polychetes. More about these worms and other pictures: http://www.science.psu.edu/alert/iceworms.htm

Life in Extreme Environments (http://www.astrobiology.com/extreme.html) has a good review of extremophiles-organisms that thrive in extreme environments.

Life at High Temperatures (http://www.bact.wisc.edu/bact303/b1) focuses on thermophiles(heat loving organisms) found in Yellowstone National Park. One caution many of what the author, Thomas Brock, refers to as bacteria are really in the Kingdom Archaea.

Introduction to the Archaea: Life's Extremists (http://www.ucmp.berkeley.edu/archaea/archaea.html)
Posted by Paul D. at 7:01 PM

Just think about what we might find on Europa if there are critters living in harsh and cold environments like this.