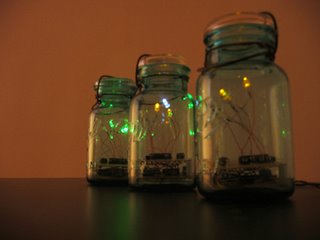 This Spring we have had lots of fireflies(Coleoptera:Lampyridae) in our yard and I enjoy watching them just after dusk. Last night we had some family from Texas who were thrilled to see them because they don't have fireflies in their area.

That was odd because catching fireflies in a jar is one of those things that defined childhood where I grew up. But I was thrilled at their reaction because it tells me that there is hope, perhaps only a modicum, that people today can still appreciate simple things in nature.

Today while taking a few minutes to prowl around for some links about fireflies. I found this link about a networked firefly system in jars by John Schimmel where LED's stand in for real fireflies. Jars can be placed around the house and people can tap on them to communicate a message to other jars which glow in response. Well you can't do this with real fireflies, but this sounds like a fun project that gets at another childhood moment, communicating with siblings late at night while supposedly being asleep, or sneaking a listen to my brothers ham radio communications, bleeding through on my little crystal radio, or listening to late night talk shows on the old Zenith that end up in my room.

I might just build this project for myself and give some firefly jars to the grandkids.

Fireflies were one of the many magical components of my childhood -- almost as magical as the praying mantis that lived in my parents' Rose of Sharon tree and that crawled on my arm when I came to visit. I grew up in Brooklyn, and by the time I graduated high school the fireflies and mantises were long gone.

Decades later Mary and I were walking after dark down the Minuteman Bikeway in Cambridge, Massachusetts, when ahead of us a cloud of fireflies seemed to simply materialize. We froze in place, awestruck. Seeing a mantid down here in Florida years after that completed the magic circle for me.

Regarding your comment at Happy In Bag ( http://happyinbag.blogspot.com/2006/06/fireflies-are-far-out.html ):
My generic little Kodak has over a dozen specialty settings. I used one called "Fireworks" to capture that image.