Of Dogs and Human Genetics 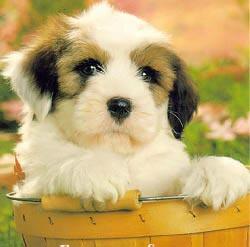 This morning on NPR there was a great report on a rare genetic disorder called Batten Disease. The report detailed the collaboration between Tibetan Terrier breeders and researchers into the human form of the disease. Batten disease(OMIM 204200), at least the juvenile form is inherited as an autosomal recessive trait. The incidence of human Batten's and related disorders is between 2 and 4 per 100,000 live births.

Where do the Tibetan Terriers come in? It turns out this breed also shows a form of this disease and equally important for human researchers, the Tibetan Terrier breed club has the first DNA database for it's breed. Also American Kennel Club has been promoting research into dog genetics through its Canine Health Foundation. So human researchers have a an animal model for studying the disease not only at the individual level, but also for studying the disease at the population level, and perhaps through the activities of dog breeders, models for other human genetic disorders.

This is a wonderful case study illustrating how different lines of genetic research converge in unexpected ways. I believe this sort of collaboration is especially critical for rare genetic diseases that are less likely to attract research monies, simply because they are so rare.