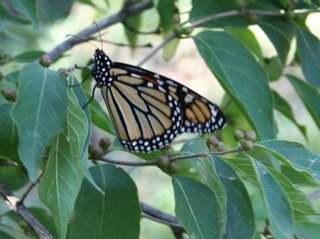 This weekend my son and I decided to go out for one of our occasional rambles to Lawrence's Baker Wetlands, he looking for snakes and me for some good insect blogging.

Late summer to me is a great time for biology because so insects and other critters are mating. At times it seems almost a frenzy of genetic recombination and good old fashioned Darwinian Natural Selection and you might enjoy a side trip to a more poetical view of the season.

We had completely forgotten about Monarch Watch doing their monarch butterfly tagging so we stopped in to see "Chip" Taylor and chatted a bit. He had quite a crew of volunteers out there tagging monarchs to track their migration and mortality and he and his colleagues have put to together a great model for how scientists can enlist non scientists to help in important scientific work.

But I was mainly interested in checking out the insects and other arthropods on fall composites such as golden rod and sunflower and relatives because I think that these insects are among the most spectacular we have and yet often overlooked by the average person. One common critter is this soldier beetle(Cantharidae) in the genus Chauliognathus. These are extremely common and familiar beetles that make very nice experimental organisms for field studies. 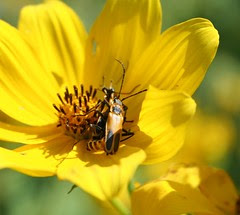 Click most of the images for a larger view on my photostream.

Often times Cantharids are confused with blister beetles, family Meloidae which we also saw at the wetlands. One of the most famous confusions is with 'Spanish Fly' a concoction of ground up Meloid once used as an aphrodisiac. The active ingredient, cantharidin is highly toxic as pointed out by Tom Eisner in his book For Love of Insects, so don't get any ideas that cantharidin might be a cheap substitute for Viagra. Dr. Eisner points out that Cantharidin is a potent insect defensive compound. So the irony of course is that Cantharidin is not produced by Cantharids at all! 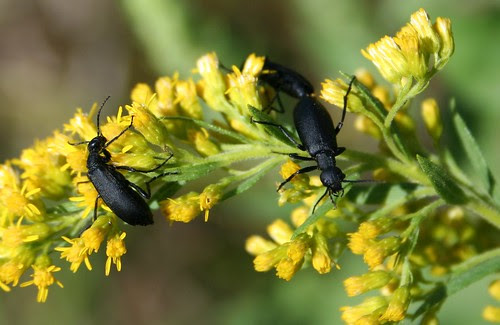 As pointed out by Dr. Eisner, certain male insects from a wide range of groups sequester Cantharidin from Meloids and present it to females during mating. Apparently the cantharidin ends up in the eggs providing protection from predators. Insects that do this are attracted to pure cantharidin, a phenomenon called cantharidiphilia. How do these cantharidiphiles get the cantharidin?

Probably one way is because when Meloids are attacked by predators they release cantharidin rich "blood" via reflex bleeding in which the blood is released at the joints of the insect. Here is an interesting report of just such a case from Bugguide:

Dr. Eisner also has a picture of anthicid beetles licking the surface of a dead Meloid apparently to take up cantharidin. As Dr. Eisner observes, there is still a lot to be learned about cantharidiphilia.

Why the initial confusion between Meloids and Cantharids? I really don't know. Cantharids are mainly predacious:

whereas adult Meloids are herbivores. Both are somewhat soft bodied beetles and I suppose could be confused with each other. 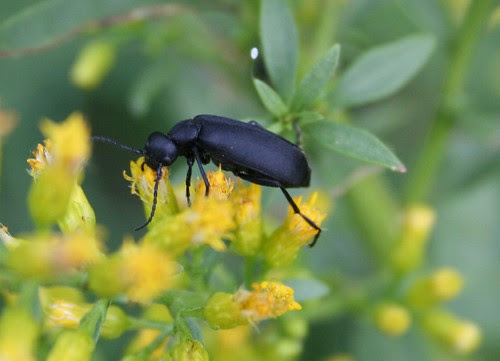 I have always loved crab spiders and they are quite abundant right now including this one on thistle and crab spiders (Thomisidae) are common on other composites. 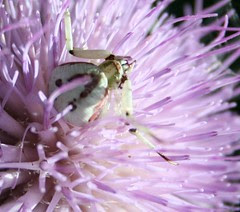 a fact I rediscovered to my dismay as a graduate student when I was trying to rear some Augochlorella bees in a bee room. I accidentally introduced some crab spiders in some flowers out in the room for the bees. The only result was some very well fed spiders. One might suspect these spiders would take Cantharids, but they don't seem to bother with them.


We were fortunate this weekend to spot a yellow crab spider (Misumena?) on a composite along with a Cantharid and decided to see how they would interact. Several times the spider would seem to touch the beetle with it's long pair of legs and then withdraw to its part of the flower. The beetle did not seem to react to the spider's presence. 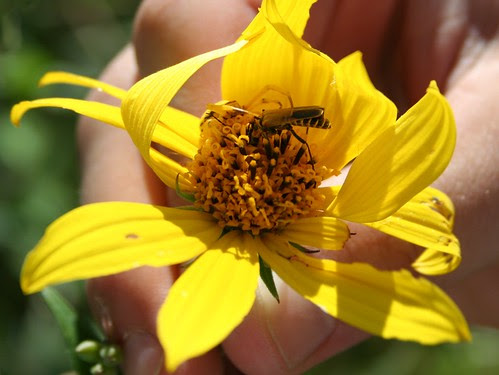 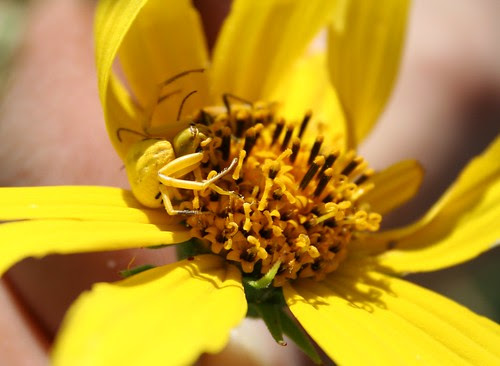 Another shot of the spider after the beetle flew off.

What is going on here? Fortunately there is a nice but hardly exhaustive database, called perfuse, of insect chemicals and a query for Cantharide shows that beetles of the genus Chauliognathus do have a potent allomone called (Z)-8-Deca-4,6-diynoic acid which is an "anti-feedent" or feeding deterrent to spiders-at least jumping spiders. Whether this same compound is a deterrent for crab spiders is not clear, but certainly this is a reasonable hypothesis.

So we have another irony. These spiders which can take on bees, including honeybees may be deterred by a compound produced by these relatively soft bodied beetles that ought to be a great food source for the spiders. I am sure there is a lot more to this story. For instance it is not clear how the compound serves to deter feeding. Is it irritating to the spider? Do inexperienced spiders need to learn to avoid the beetles? Is the compound even a defensive compound or do we perhaps have the chemical equivalent of warning coloration and the defensive compound is something else?

Each creature, whether the charismatic monarch butterfly, or the somewhat more mundane beetles discussed here all have wonderful coevolutionary adaptations to predators, and wonderfully complex stories yet to unravel.

Great post, Dr. Paul. That is really cool that you saw so many crab spiders. I was completely unfamiliar with them until I watched Life in the Undergrowth, and I've been keeping my eye out, but no luck so far...