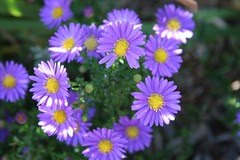 It's fall now, and it looks like Kansas bloggers are spending a lot of time outside and not so much time blogging. So I had to do some serious digging to grub up some posts for this week, but there is still plenty of life and diversity in the Kansas portion of the noosphere and I tried to reflect that diversity in my selections this week.

Politics and religion are on the mind of a lot of Kansas bloggers lately so first up from Pat Hayes over at Red State Rabble is a report on events related to Judge Jones's recent appearance at the University of Kansas. Judge Jones is the judge who rendered the decision that intelligent design is not science in the Dover Pennsylvania case.

Next up Josh Rosenau, who hosted the last KGB carnival, worries about the recent votes in Congress to increase presidential powers to hold citizens without Habeas Corpus in terrorism cases.
http://scienceblogs.com/tfk/2006/09/in_which_i_steal_material_whol.php

A very different take on the same issue is at another Kansas Blog:
http://www.wholewheatblogger.com/index.cfm?fa=blog.entry&permalink=2006/09/war-on-terror-do-we-know-enemy.xml

Over at Evolution-next step, j.d. wonders if government is going too far in terms of requiring felons to register on a list. He reports on a proposal to require convicted meth dealers to be on a registry just like sex offenders.
http://www.evolution-nextstep.com/archives/3108

A Christian reflection about the Middle East and the events happening there comes from Phil Dillon over at his blog, Another Man's Meat. He has an interesting meditation on Armageddon. He seems to think that maybe Armageddon is coming but he cautions Christians:

... It seems to me that this is not the time to be self centered. Christians, of all people, should be focusing on more than just themselves, as if GodÂ’s sole purpose is to bring them to some mystical state of self-actualization.

A quite different perspective is at The Science Ethicist, an unabashedly anti religious blog where Aerik at the believes that fellow atheist PZ Myers is wrong when he says that other people's beliefs are not any of his business.
http://thescienceethicist.blogspot.com/2006/09/more-science-blogging-cowardice.html

Continuing our set of articles dealing with religion and government we have a post from John at Blog Meridian, who has been a regular host for Kansas Guild of Bloggers. John discusses the relevance of Henry David Thoreau's essay on civil disobedience to today's world situation and the policies of our government.
http://blogmeridian.blogspot.com/2006/09/stretch-of-river-xxi-resisting-thoreau.html

Here is one more post from Josh at Thoughts from Kansas who takes umbrage at the phrase "citizen journalist"
http://scienceblogs.com/tfk/2006/09/citizen_journalism.php.

Josh observes that with respect to himself and his blogging that:

"I have spent time talking to sources, and there are people in Congress and in campaigns who take my calls. That makes me a journalist. And having done that work, I know that it's serious work, hard work, that deserves to be taken seriously."

I saw Josh at work the other year blogging the evolution hearings at the Kansas Board of Education and he certainly does work hard. Also j.d. has an entry on the same subject wich ought to be read along with Josh's.


On the lighter side, another article submitted by John at Blog Meridian takes a not very serious look at T.S. Eliot's most famous poem in "The Love Song of J. Alfred Poprocks" (excerpts)"

Kansas is an innovative state and since I am a chocolate fiend, I could not resist highlighting Lady Gunn's post introducing us to a new type of chocolate over at http://ladygunn.blogspot.com/2006/09/three-forms-of-chocolate.html

I wonder if I can talk my dentist into using gaseous chocolate along with laughing gas.

Speaking of food, KS cowboy discusses the merits of old style coffee makers in a post that elicits fond memories for those of us who grew up in households where thepercolatorr was always on the stove.
http://kscowboy.blogspot.com/2006/08/coffee-makers.html

Finally since this is fall, I thought I would end with a poem, originally written for Poetry Thursday's weekly prompt. Of course the poem is not really about fall or Katydids. Be sure to read the associated commentary.

I hope I have properly reflected the diversity of Kansas bloggers. If I missed one of your posts about Kansas, make sure you submit your entry to the kgb's submission page! Next week's kgb carnival will be probably be back to Blog Meridian.

Paul,
A very nice round-up. I'll be setting up things for the next Carnival.

Technically, I live in Missouri.


By the way Paul, great round-up this week!


By the way Paul, great round-up this week!