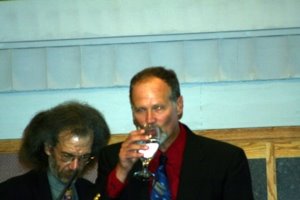 Ken Miller spoke tonight at the University of Kansas as part of KU's Difficult Dialogues at The Commons series. As noted earlier Dr. Miller is a Catholic and a theistic evolutionist who sees no conflict between religion and science. There was a lot in his talk; he reviewed some of the recent evolution controversies such as Kansas and the recent Dover PA court case and had some really amusing things to say about certain intelligent design advocates such as Michael Behe. The big take home message was that the anti evolution movement is nationwide and world wide. He pointed out that acceptance of evolution is not that much different in England than in the United States.

He then examined why evolution is under attack. His assertion is the attack is due to the belief that evolution is seen as the foundation for anything that is wrong with our society. The key weapon of the antievolutionists is the notion that evolution is antitheistic, a notion reinforced by evolutionists such as Richard Dawkins and Daniel Dennett. Miller very boldly I think claimed that saying science can lead us to a deep understanding of the purpose of existence has no more standing scientific than faith based statements. Neither are testable.

Miller next argued that religious people make a mistake when they attack evolution when what they should do is argue against the notion that evolution necessarily leads to an antitheistic interpretation of evolution. This is a really interesting idea and Miller believes that a discussion of this may lead to some sort of peace between science and religion. Science has limitations in that it doesn't carry people "as deep into the mysteries of life as we want to go". At the same time, following St. Augustine's "On the Literal Meaning of Genesis", Miller argued that using scripture to interpret science is a mistake as well. 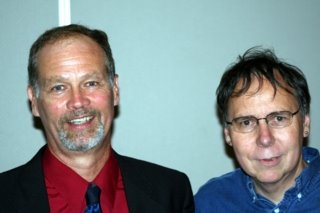 Faith and reason in Miller's view are both gifts from God and should complement each other. Indeed he argues that faith gives reason to pursue science because it provides at least in Abrahamic religions the notion that nature can be understood. Faith after all has to be grounded in reason. In an analysis very similar to Stanley Jaki's Savior of Science he noted that science is also a child of faith because science require the human being to step back from nature, a notion quite different from the notion in Eastern religions that man and nature are one. I asked him about this after the talk and he was no familiar with Jaki's arguments about the origin of science.

Ken Miller's the handsome one on the left. On the right is some local Kansas Blogger.

A questioner asked if all faiths are equally valid and can science help us choose. Miller's answer was quite interesting. No all faiths are not equal. Saying that they are implies "a failure to choose." At the same time science is not much help either and since we are "severely limited" in our ability to comprehend the world we are required to respect the choices of others.

Most of the audience was friendly but I did catch the infamous Tom Willis who was active in drafting the Kansas 1999 creationist designed 'science' standards. Here he is smoozing with a reporter. One can only wonder what spin he is going to put on Miller's talk.

I wonder if Miller had any thoughts on the replacement for Coyne and whether there were church politics involved.

He didn't mention Coyne directly but did allude to the Pope's seminar, suggesting that the Church is ready to reject intelligent design.

That's really great that you got a pic with Miller. He's definitely a voice of reason among the din of philosophers.

Why do you say "infamous" Tom Willis?

He has his views and you have yours.

Perhaps you should clarify what you mean.

I certainly would not want anyone to think you were libeling Tom Willis is some way.

Of course I mean infamous in the more benign sense of controversial. You must admit he is always that...right?